Why does a traditional wedding cake have three tiers?

Ever questioned why on earth we must have three tiers for a wedding cake? It's not just because it looks balanced, pretty and all that. Ever questioned why on earth we must have three tiers for a wedding cake?

It's not just because it looks balanced, pretty and all that, it's because each tier has a meaning. The bottom tier is supposed to be given out at the ceremony itself, careful girls don't spill any! The middle tier is for eating after the marriage ceremony, which is where we tend to eat the cake these days. The top layer, this is where tradition really kicks in, back in the 19th Century this tier was kept until the first child's christening which didn't seem strange at the time as children often came fairly quickly after the marriage. Fruit cake is also the traditional flavour which works well for all the guests at that christening as it has a long shelf life. However as the 20th and 21st Century came in children began to arrive later and later so the top tiers significance has changed, it's now saved for the happy couples' first wedding anniversary. The layered foodie feature originated in a medieval tradition whereby individual cakes were stacked one on top of the other as high as possible, and the bride and groom were asked to kiss over the top of it. If they kissed without knocking it down, that meant it would be a successful marriage! Wedding cakes have certainly changed a lot of the years as in the 17th century there were two separate cakes – a bride’s cake and a groom’s cake. [caption id="attachment_12212" align="aligncenter" width="300"] 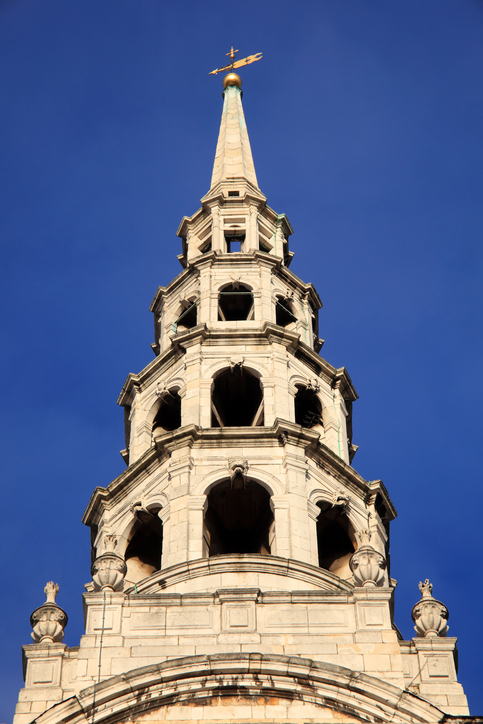 The spire of St Bride's Church designed by Sir Christopher Wren in 1672 stands on Fleet Street in the city of London, England. It is said to be the inspiration for the tiered wedding cake.[/caption]
The current style of the traditional wedding cake was said to have been invented by London pastry chef William Rich (1755-1812), who was inspired by the steeple of St Bride's Church in London and based his own wedding cake on this. This story first appeared on The Sun
Content continues after advertisements