How to... make a Giant Cupcake Christmas Tree Brought to you by Britt Box from She Who Bakes

I've created this cake using a giant cupcake mould, but you could easily do this with two 17cm (7in) round cakes carved to make a similar shape. For this cake, I recommend making the cake, decorations and covering the board on the first day, leaving everything to set, then coming back to stack and decorate the following day. 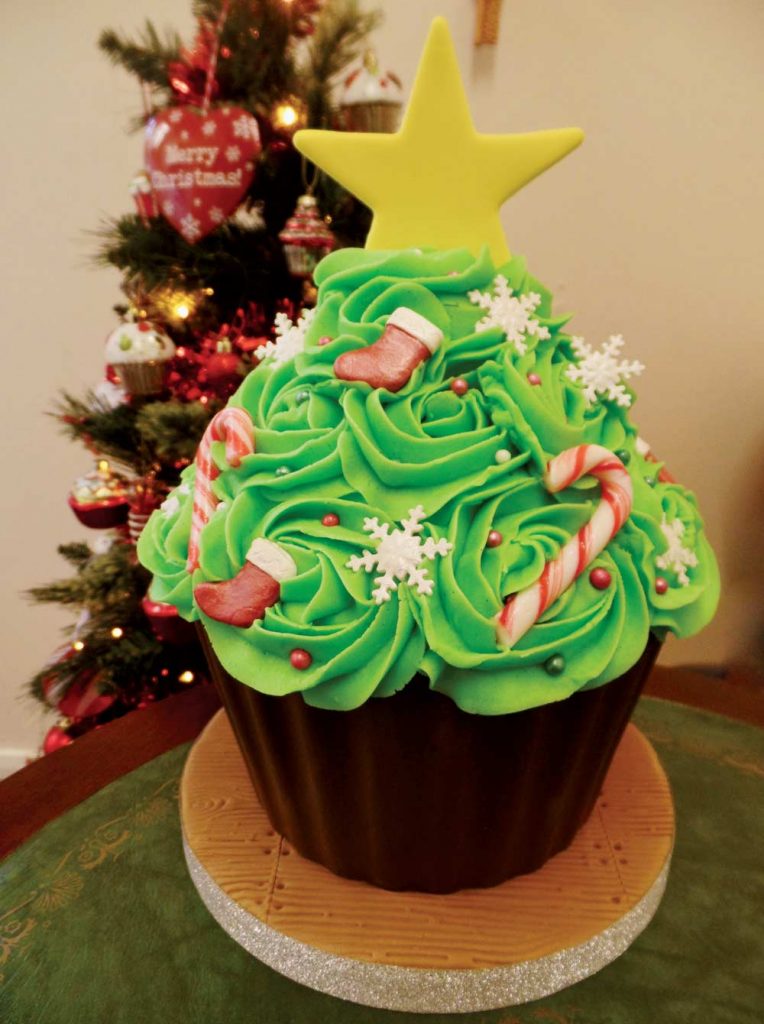 You will need • a giant cupcake (or 2 x 17cm (7in) round cakes carved to shape) • small cake board (I used a 15cm (6in) round) • 250g(9oz) sugarpaste in  your chosen colour (I used brown) • a pack of milk chocolate candy melts, candy buttons or 300g (101⁄2oz) Belgian milk chocolate • a large piping bag • 2D nozzle • a little royal icing • green buttercream (I used Sugarflair Party Green) • Christmas-themed moulds/cutters for decorations/pre-made decorations or sweets • 15mm ribbon & double-sided sticky tape OR washi tape If you’re using a giant cupcake mould, this is the recipe I recommend;

For the giant cupcake Madeira cake

• 300g (101⁄2oz) self-raising flour • 300g(101⁄2oz) caster sugar • 300g(101⁄2oz) Stork/butter • 85g (3oz) plain flour • 5 medium free-range eggs • 1 1/2 tsp vanilla 1. Cream together the Stork and caster sugar. Add the eggs, followed by the flour, then the vanilla. 2. Mix for 4-6 minutes on a high speed. 3. Pour just over half of the mixture into the bottom mould and just under half into the top mould; the mixture should fill the mould three-quarters full. 4. Put both halves of the mould onto baking trays and bake at 160°C/Gas Mark 3 for 1 hour 20 minutes, or until a skewer comes out clean. (Check after 1 hour.) 5. Once baked, leave to cool in the mould then, very carefully, turn the cake out onto a sheet of greaseproof paper by peeling the case back and leave to cool completely. Once cooled, wrap in clingfilm overnight to‘settle’. Once split, filled and iced, this cake will last 5-7 days and will freeze well for 3 months. TIP: I recommend making the cake the day before you want to decorate to give it time to firm up so it doesn't fall apart when you are decorating. Make sure to leave it wrapped well in clingfilm in a cool dry room, not the fridge as this will dry the sponge out.

• yellow modelling paste • large star cutter • cornflour • small rolling pin 1. Roll out yellow modelling paste onto a surface dusted with cornflour and cut out a large star. Leave to dry overnight on foam. I don’t recommend using sugarpaste/icing for this as it won’t dry hard enough. 2. Now, make any other decorations you would like. I made snowflakes using flower paste and a plunger cutter, then I made small stockings using modelling paste and silicone moulds, which I painted with edible food paint. I'm also using small shop-bought candy canes. You can make whatever you like, or alternatively use pre-made edible Christmas decorations that are readily available in cake shops and supermarkets. 3. To cover the board you will need 100g (31⁄2oz) sugarpaste (ready-to-roll icing). I used a dark brown as I textured the board to look like wood grain, but you can use any colour. 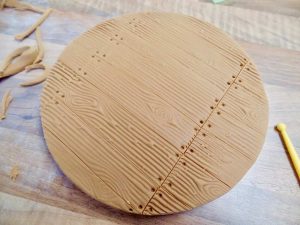 4. To do this, roll out the icing to 5mm (1⁄4in) thick on a corn-floured surface, turning the sugarpaste as you roll to get an even shape and to stop it sticking. Spray the drum lightly with water then, using the rolling pin to lift the sugarpaste, lay it gently on the drum, securing it with your hand and cutting off the excess with a sharp knife 5. Before I left my board to set, I textured it using a texture mat. Starting at one end of the board, push the pattern onto the sugarpaste in an even fashion, then leave to set overnight. 6. Using either double-sided tape and 15mm ribbon or washi tape (I used sparkly silver washi), decorate the edge of the cake drum. 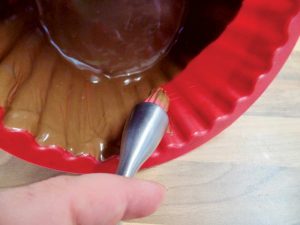 Start by making the cupcake shell. I used milk chocolate candy buttons to resemble the trunk of the tree, but you can use whatever colour you like. You can also use candy melts/buttons or even milk chocolate instead. If using chocolate, I recommend using good quality Belgian chocolate because I've found that standard chocolate bars may crack when you are trying to get it out, and it also sometimes melts when you are handling it. I also advise painting the inside of the mould or tin with a little cake release first, before pouring in the chocolate to make it easier to come out. 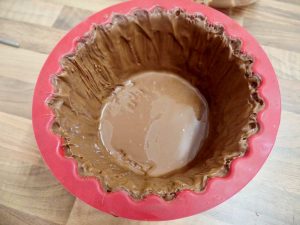 1. Melt your candy melts/Belgian chocolate, then pour half of this into your cupcake base. 2. Using a silicone brush, paint the candy/ Belgian chocolate up the sides of the case, being quite quick but firm. 3. Pop it in the fridge to set for 20 minutes or so, then take it out and give it a second coat, repeating the first few steps. You may need to re-melt your candy/chocolate. 4. Put it back in the fridge to set for a further 20 minutes, then gently peel the top of the case away from the shell to check it has set. 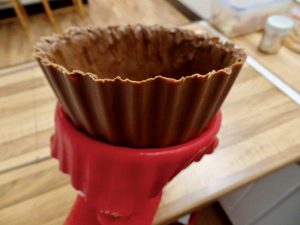 7. Then go around the shell only releasing the top, then pull the sides of the base down away from the shell. If you don’t have a giant cupcake mould, you can ice the bottom half using brown sugarpaste to create a similar effect. 8. Now you have the shell, board and decorations from the day before, it's time to put it all together! 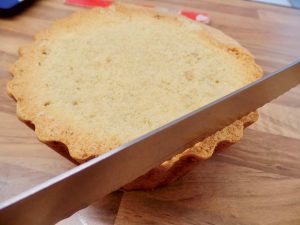 9. Level both cakes by using a cake leveller so they sit flat, then trim the base cake slightly as the shell is now a little thicker thanks to the candy buttons. 10. Split the base cake in two and fill with whatever filling you like. I used vanilla buttercream that I coloured green with Sugarflair Party Green. 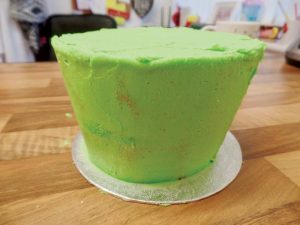 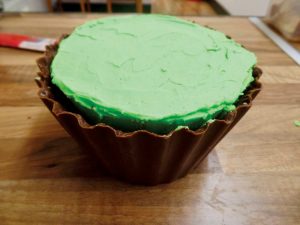 12. Gently place on the cupcake top, then press down gently but firmly to ensure it is stuck down. Crumb-coat the top of the cake by spreading on a thin layer of green buttercream; this will help your piping to stick and stop any cake from showing through. 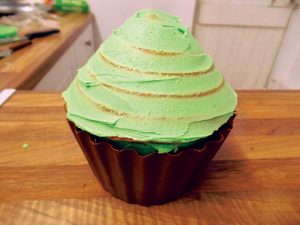 13. Next, we'll decorate the top with buttercream swirls. Fit a large piping bag with a nozzle of your choice (I used a 2D), then fill the bag with green buttercream. 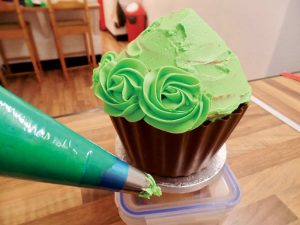 14. Starting around the base of the cupcake top, pipe swirls starting on the inside and working your way out, gently but firmly, making sure to allow a little room between your nozzle and the cake for the design to come out. Go around the base of the cupcake top, then in between these on a second layer. Repeat until you are at the top, then pipe one large swirl on the very top of the cupcake. Pipe small stars in any gaps by squeezing firmly, stopping squeezing and then pulling away. 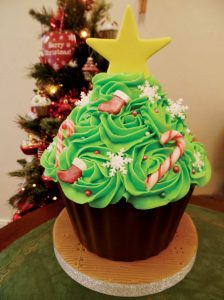 15. Decorate as desired, placing the large star into the buttercream at the top of your cake, then adding any other shapes you like. 16. Once decorated, carefully fix the cake onto the iced board using a little buttercream. Leave in a cool, dry room until serving! This will last about a week if decorated fully (so no air can get to the sponge!), then 3 days once cut into, if it's wrapped well in clingfilm. Make sure not to leave it in a room that gets too warm for too long, otherwise, the buttercream and chocolate casing may start to melt. Happy baking and Merry Christmas! Britt xxx