An Interview with Harpreet Baura on the new dessert trend Bijou Choux is proud to announce the new ultimate dessert trend - Le Chouxnut, a unique creation that has been described as an éclair-doughnut hybrid. 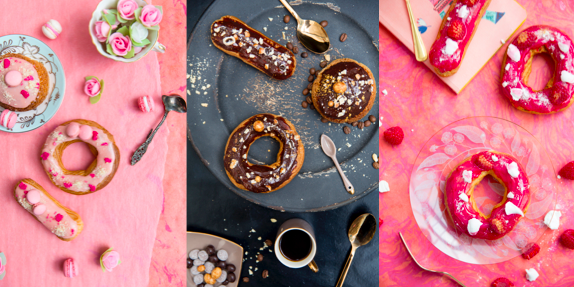 Bijou Choux is a celebration of two basic concepts: perfect pastry and unashamed, unadulterated pleasure. Launching this September in the home of high-end food and drink - Selfridges - this new choux brand is the ultimate in luxury indulgent snacking.

Inspired by a love of choux fostered during nostalgic trips eating around the finest Parisian patisseries, founder Harpreet Baura has developed a range of products that celebrate the heritage of these classic desserts – but with a brand new touch of glamour. Bijou Choux founder Harpreet Baura is a baking entrepreneur. With years of experience as a cake designer, Bijou Choux is a new project for Harpreet building on the success of her cake business, Crumbs Couture. Her work has previously been celebrated in Vogue, Glamour, Time Out and Condé Nast Brides Magazines, amongst many others. In 2009, Harpreet quit her job as a solicitor to pursue the dream of setting up her very own cake company.  We wanted to find out more about the brains behind the business. [caption id="attachment_9074" align="aligncenter" width="207"] 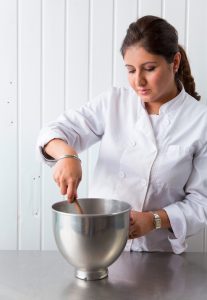 Harpreet Baura - Image: Crumbs Couture[/caption]
What made you want to quit your job and pursue you dream of setting up your own cake business; Crumbs Couture? I grew up thinking that a profession such as the law would be the only option after leaving university. Once I had achieved the task of getting my dream job, I realised that it was far from what I wanted to do. So, I decided to take a break and set up Crumbs Couture and within a year I realised that I did not want to return to my previous career, I was so much happier running my own business. The rest, as they say, is history. Tell us about your first memory of baking? My mother is a GP and used to do housecalls to visit poorly patients. She visited one lady who offered her a cup of tea and a slice of homemade cake. She liked the cake and so she asked for the recipe, which looked fairly simple. One afternoon when I was harassing my mum with shrieks of “MUM I’M BORED”, she got out the diary in which she had scribbled the recipe and helped me to make a simple marble cake. In that moment, a budding baker was born! Where did the idea for the Chouxnut come from? Bijou Choux was initially supposed to be a company that specialised in choux buns but I decided to make éclairs also. During the initial stages of setting the company up, I read an article on the popularity of the Cronut and thought that the idea of a ring-shaped éclair sounded rather fun. We tried to make some and they were really pretty, allowing us to show off the decorations a lot better than the Choux Bun and the éclair. Who would have thought that it would become the signature item of our company?! What’s the finest pastry or doughnut you’ve ever had? Pasteis de Nata are one of my favourite types of pastries and Lisbon Patisserie in West London does some of the best I have ever had. Did you go through a lot of processes before you arrived at the perfect combination of these two concepts; the doughnut and the pastry? Once the idea had come to me, we began piping the choux paste into a ring, thin enough for it to still look attractive and have a hole in the middle, but then thick enough for it to allow us to fill it with crème patissiere. We created a few monster Chouxnuts along the way, far too big for us to sell them. Once we had found the perfect choux recipe and the perfect piping nozzle, we were on our way. Have you tried merging any other desserts before? We have made a range of cupcakes that feature macarons on top, as well as many cakes that have meringues on top, but those are more of a pairing than a “mash-up”. How do you come up with new flavour combinations? I love to eat desserts and try all the different food offerings around London and the world, so I am often inspired by what I see and taste along the way. Our Raspberry Chouxnut is inspired by Eton Mess, which is why it has a meringue decoration on it. The Pistachio and Rose is inspired by middle-eastern desserts and the flavour combination works very well together. Do you have a favourite flavour from your selection of Raspberry, Pistachio & Rose, Coffee, Vanilla, Salted Caramel and Chocolate? I love coffee-flavoured creme patissiere, so the Coffee Chouxnut is one of my favourites. I also love the look of the Pistachio and Rose Chouxnut as it looks like it is fit for a princess.

What has been the biggest challenge to get people interested in Le Chouxnut? I worry that people might have hybrid fatigue, but thankfully they are so visually stunning, they have amassed quite a following on social media.  Lots of people have been stopping at Selfridges to pick some up - the feedback we have had so far has been amazing! You’re work has been celebrated by prestigious names such as Vogue and Glamour, what has been the best highlight of this new venture so far? The Chouxnut has been sampled by lots of high profile names and it’s been lovely to have have had some wonderful feedback on them. The highlight so far was securing Selfridges as the first stockist, which was huge for Bijou Choux as such a new company. Walking in to the Food Hall and seeing our Chouxnuts on display was such an uplifting moment! What are your plans for the future? I would love to open up a retail counter to sell our choux products in a mall, so that would be our ideal next step. Behind the scenes we have already outgrown our new kitchen so we may need to move again. I would also love to write a book teaching home bakers a few tips, allowing them to perfect their own choux products.
Content continues after advertisements