In the Kitchen With Jo Wheatley

We catch up with Jo Wheatley, winner of The Great British Bake Off in 2011. Jo is part of the new wave of British bakers helping to reinvigorate the nation’s taste buds... We catch up with Jo Wheatley, winner of The Great British Bake Off in 2011. Jo is part of the new wave of British bakers helping to reinvigorate the nation’s taste buds... When and why did you first become interested in baking? I was about three, when I would stay with my maternal grandmother at weekends and she’d stand me on an upturned bucket and bake with me. Why did you enter GBBO? In July 2010 my friend Frances mentioned that there was a new show about to start that she thought I’d love. It was called The Great British Bake Off. I applied, but had an email back saying all that year’s contestants had been chosen, but would I like to be put on the list for 2011? I ticked yes and thought no more of it. I watched the show, but forgot all about applying until an email came asking if I was still interested. I ticked yes – the best decision I’ve ever made. How has life changed since the show? Massively, it has given me a confidence I never thought possible. It still amazes me that somebody like me can have two Times bestseller books. I’ve always known I could cook and bake, but to have that accolade was something beyond my wildest dreams. I love recipe developing, it is such a passion and joy for me, so to have a career in something I adore is the icing and cherry on the cake. What do you teach at your home cooking school? I teach all aspects of baking, my classes are very informal. I want people to relax and have a memorable time, one of those days when you look back years later and think that was such fun. I start by serving everyone tea and coffee and something baked in my conservatory, then we bake. It can be one of my multi-bake days, where we bake a bread item, a cake, some biscuits and a pastry dish. On my cupcake days you’ll bake 12 cupcakes and then learn all aspects of decorating them, from buttercream roses to fondant animals. I love this class, it’s so relaxing and I love seeing how people’s individuality shows through with their decorating styles. On my bread classes we bake four types of breads, including cinnamon buns and my granary loaf. The day includes a two course lunch with a complimentary glass of nice wine and all the packaging to get your bakes home safely. (Visit www.josblueaga.com/p/2014-classes.html for more.) What are your favourite flavour combinations? I love rosemary and lemon together when I’m cooking dinner. For baking I love trying different flavour combinations all the time – I think my favourite changes with my moods. What do you do if a recipe goes wrong? Recipes do go wrong, but it’s very rare that they aren’t salvageable. If your cake is under baked in the centre, use a circle cutter to remove the centre and fill with fresh fruits or cream or chocolate (or all three). If your tart has a soggy bottom that’s never good, but actually learn from it, write it on the recipe and next time bake at a little lower temp (so the top doesn’t burn) for longer. Another good tip is to heat a baking tray when preheating your oven so the pie cooks from the bottom as well as the top. Are you more of a pastry or cake fan and what recipe couldn’t you live without? That’s such a hard question as both have special places in my heart (and tummy). But I think it probably would have to be cake if I had to choose – I’m so pleased I don’t have to! A good old Vicky sponge, she’s so versatile – dress her up in cream and fresh fruits or down with raspberry jam and caster sugar. For a special occasion, whip up a chocolate ganache with some lime zest, sandwich together and spread a layer on top, then sprinkle with toasted coconut. She also bakes beautifully over an ovenproof dish filled with soft fruits. Sprinkle with toasted hazelnuts before baking for a gorgeously comforting pudding. Why do you think baking has seen such a big revival? Five words: The Great British Bake Off. Plus, it’s such a nurturing pastime. Everybody loves cake and I think they always have. How did it feel watching GBBO after you had won? It felt bizarre. To see yourself on the TV is an odd thing. I think most people are very critical of themselves and I’m no different – I still can’t watch the final without crying when I see the look of pride on my boys’ faces, just writing about it evokes such strong emotions. Would you advise others to enter GBBO? I’d say go for it – if you don’t try, you’ll never know. It’s easy to play safe, but more fun to get out there and try stuff. 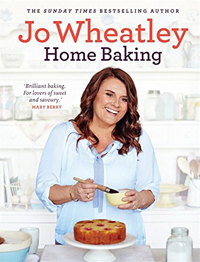