Latest
£10 tickets to The Cake & Bake Show this October! Around the world in 100 cake ingredients How to make fondant koala cake toppers Caterpillar cake How to create a chalkboard effect cake

Bake it Big with Glenn Cosby – on tour this summer! 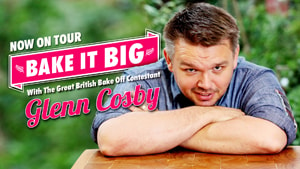 If you need another fix of the Great British Bake Off before the next series starts, you can catch series four contestant Glenn Cosby on his first UK tour this summer. Renowned for his 'Big Bakes', Glenn will be touring the country with a live cooking show like no other – and promises to make you laugh, cook and bake it big. We caught up with Glenn before he embarked on his multi-date tour, to chat about his life after the show… How has your life changed since the Great British Bake Off? Life has changed in lots of ways since the Great British Bake Off, not least because I have now taken the plunge and left teaching to pursue a career in TV. The reaction of people to the show and to me is completely amazing and exciting, giving me opportunities to appear at all kind of events and festivals and to take my stage show, Bake it Big, on a national tour. I am also taking another show, Food Junkie, to the Edinburgh fringe in August. When I was eighteen I made the sensible decision to go to university, but secretly I wanted to either perform on stage or work in food – thirty years later I am getting to combine both. 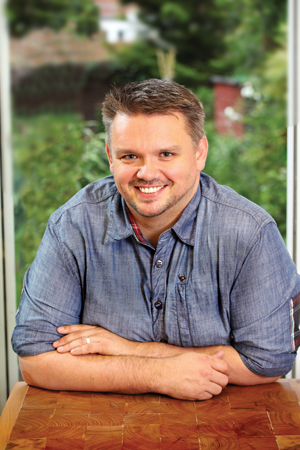 How did your students react to your TV appearance?  My students were completely supportive and excited about my appearing on the television. Many of them love the Bake Off, but the viewing figures in South Devon definitely spiked with proud and star-struck pupils at school. I was expecting them to take the mickey out of me, particularly when things went wrong – and let’s face it that happened plenty! – but they were really kind and supportive. What are your favourite moments from the show? My favourite moments were often ones that didn’t happen in front of the camera – playing charades with Mel and Sue, and singing and laughing with the other contestants on the bus to and from the tent were among the best moments. Are you still in touch with any of the other contestants? I am in touch with all of the other bakers. We don’t see each other as much as we would like, living all over the country, but we are in constant contact on Facebook and speak regularly. Lots of them are involved in the Bake it Big tour as guests which I know the audiences are going to love. Who is scarier – Mary or Paul?  Paul is definitely scarier! Mary always finds a positive way to say things, and offers some advice on how to do it better next time, whereas Paul tells you exactly what he thinks… What's the biggest thing you've ever baked? I baked a croquembouche for my brother and sister in law’s engagement party and I think it had about 400 choux buns – so that was probably the biggest thing I have ever baked. What would you most like to do with your newfound career? I would like to continue to share my love of food with people, and why not present Saturday Morning Kitchen when James Martin moves on… Do you have any top tips for young people looking to get into baking? Ask your parents for their permission and possibly help, then just get stuck in – have fun and start with something simple like scones. 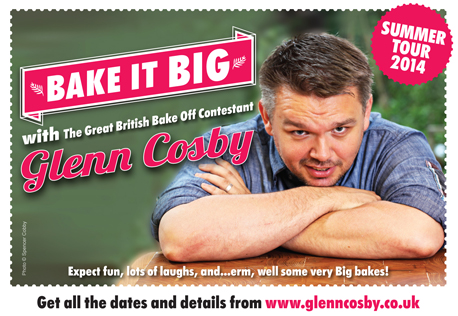 Bake it Big with Glenn Cosby is touring at a number of UK venues from 22nd May to 25th October 2014. For a full list of dates and venues visit www.glenncosby.co.uk or visit him over on Facebook.