Latest
How to start an online cake business part two – 6 ways to win on Google WIN! One of five ProCook Bakeware bundles worth £50! How to make fondant koala cake toppers £10 tickets to The Cake & Bake Show this October! How to create a chalkboard effect cake

Bake Off fans are outraged after hearing this news...

The Great British Bake Off is, without a doubt, one of the nations favourite shows – it's cosy, goes perfectly with a cuppa! 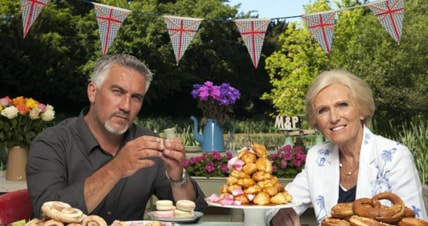 The Great British Bake Off is, without a doubt, one of the nations favourite shows – it's cosy, goes perfectly with a cuppa and suits us well on an autumn evening! 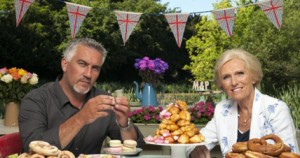 There is something for everyone, from likeable contestants to terrifically timed puns. But, for aspiring bakers, we love nothing more than the beautiful examples that Mary Berry and Paul Hollywood the place before our eyes for the technical challenges each week. Which is why it's come as such a shock to many that Berry and Hollywood actually have nothing to do with those marvellous plates of goodness! That's right. It's been revealed that despite giving viewers the impression that they spend as many hours as the contestants, making their bakes behind the scenes, the judges have never so much as whisked an egg during their time on the Bake Off. Love Productions (the show's producers) confirmed: "Paul and Mary don’t make the cakes. They never have.” They added, as an explanation: “They are baked on the day and Paul and Mary could never do that.” Some were very upset...

@TheSun it makes me feel sick, empty inside!

Others weren't that suprised at all...

Can't believe people actually thought Mary and Paul sat and baked the technical bakes. It's a proper TV show, not a home production!

Many described the news as "heartbreaking” – with countless others suggesting that they had been “kept in the dark” for too long with regards to this “illusion”. It will be the last time that fans will see Berry, Giedroyc and Perkins inside the tent, following their decision to remain loyal to the BBC and not “follow the dough” to Channel 4. However do not fear, this isn't over – the BBC have already set up their replacement for Bake Off, which is set to air next year. And what's more? It seems as if they’re set on reuniting the original GBBO gang for it, too. This story first appeared on Stylist