Latest
Around the world in 100 cake ingredients Royal icing made simple: Renshaw Academy's guide to easy decorating WIN! One of five ProCook Bakeware bundles worth £50! How to create a chalkboard effect cake £10 tickets to The Cake & Bake Show this October!

It's not over just yet, a Christmas special is being whipped up and with this news we couldn't be more excited! Thank you, BBC! 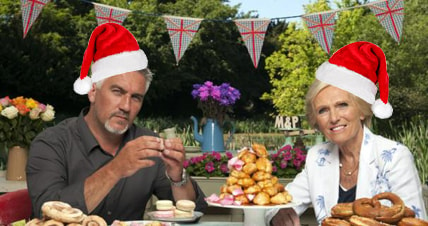 It's not over yet, Christmas is coming and with this news we couldn't be more excited!

As the Beeb lost their beloved show to Channel 4, they have one last oppurtunity to give the show a joyous send-off! The BBC have agreed to have Mary, Paul,  Mel, and Sue back in the white altar for one last time, let us introduce The Great Christmas Bake Off. We're been treated to not just one but two episodes of the merry baking show, the pain and disappointment of the show's move will seem a distant memory as we head straight to our teleboxes for some festive fun! But wait, it get's better. The BBC have filtered through all the old shows, in order to deliver us some nostalgic viewing pleasure. Bakers from previous shows will compete, once again, before the judges! All together there will be eight bakers who will return across both Christmas specials, each aiming to avoid becoming the finalculprit of a 'soggy bottom' instead, striving towards the title of Festive Bake Off Champion. Most the names are being kept quite at the moment however, The Sun have let on that Cathryn Dresser is bringing back some 'fridge and pray' tactics. And Remember Howard Middleton? He will also be returning but this time with less trouble and less #custardgate. So, lets forget the woes of the fast approaching reality that the Bake Off will be on Channel 4 and have ourselves a Mary Berry Christmas and Yule Hollywood handshake! This story first appeared on Stylist