Latest
Ideas for baking and cake decorating this spring  7 healthy baking swaps Types of icing: how many do you know? How to model a fondant boy standing up Blackberry mini changecakes

Campaign for a Bagel Emoji! Demand for more emojis continues with campaign for a Bagel Emoji! 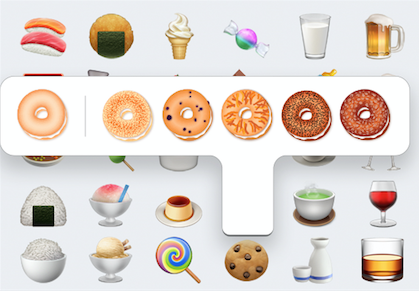 Emoji is the fastest growing language in the UK, with a whopping 92% of the online population using them to better express what they’re trying to say, according to the 2016 Emoji Report. Footballing superstar Paul Pogba recently became the first player to get his own emoji, even printing them on his pair of boots, while the trend for eating smashed avocado resulted in one too. So it’s unsurprising that another campaign has started, this time for a bagel emoji! Despite us Brits consuming over 320 million bagels each year, bagels are yet to make the digital leap. They’ve been overlooked in the emoji world for far too long. To celebrate the wonderful bagel and appropriately mark National Bagel Day (this Thursday 9th February), the New York Bakery Co. is launching a campaign to demand the introduction of the bagel emoji. Amy Page of New York Bakery Co. asks; “Just how are the public meant to celebrate National Bagel Day each year without being able to express their love in a visual format? How are you meant to ask someone over for a bagel if you can’t say it with an emoji?” A link to a petition page and a downloadable jpeg form of a bagel emoji will be used to drive conversation on Twitter and Facebook and begin a social movement to support the #BagelEmoji, in the name of bagel lovers worldwide. Join the movement and demand more emoji – SIGN THE PETITION

1. Halves the bagels and lightly toast.

2. Scoop the flesh from the avocado and lightly mash with a fork. Squeeze in the juice from ½ a lime and season with salt and pepper.

4. Spread the bagel with the sundried tomato paste; top with the smashed avocado and sliced chicken.

5. Finish with a layer of spinach, place the top of the bagel on top and gently squash down.