The Great British Bake Off went olde worlde style for the quarter finals, say hello to thy Tudor Week featuring marchpane and jumbles! The Great British Bake Off collided with an olde worlde style in the quarter finals, say hello to thy Tudor Week

The Tudors did everything to show off, even pies were displayed in some sort of ye old delicate design, so of course, presentation was everything. Despite traditional flavours close to hearts of the Tudors (e.g. meat, spice and vegetables), Candice wanted impress the judges with her fishy flavours incorporating oysters, and let's just say Mary's expression of pure delight said it all. Across the room, Jane displayed her many talents but Paul wasn't sure about the fat content, fussy! Everyone else did fairly well, but the time had certainly not yet come to retire to the lounge!

It was a Paul challenge surely these guys must cease any chance of winning, it's over! However the Telegraph's Rhik Samadder posed a comparison between Rocky and Jane's inner mindset, which looks something a bit like this (see below) so we pressed on. [caption id="attachment_9107" align="aligncenter" width="240"] 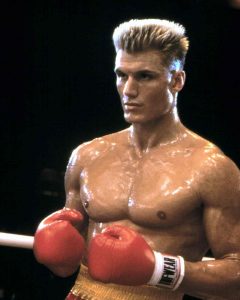 Jane inner monologue. Image: Cine Text / Allstar/Sportsphoto Ltd. / Allstar /The Guardian [/caption]
Jumbles are ancient cookie-like pastries that were commonly eaten in England and abroad during the Tudor period. The recipe consisted of nuts, flour, eggs, and sugar, plus some vanilla, and caraway seed which give it some flavour. Andrew and Selasi were giving off some bromance vibes, sharing a few loving glances this week, anyone drawing similarities from the beauty and the beast?! Andrew wanted to "take the Selasi approach" when deciding on the best way to use his pestle and mortar!

It's a tough call but Jane came last, Andrew landed in second place (probably due to his meticulous calculations) and Candice won the challenge despite her finished products being massive! It's a sad week for Benjamina, falling into second to last place, her bakes were pale, she didn't put the sugar on the before placing them in the oven like Master Candice did. The Showstopper: Marchpane A fancy word for 3D Marzipan constructions, basically. What a fun old age challenge, our expectations of beautiful, intricate designs were high, as Elizabeth I's were! Benjamina opted to construct a maze, in which we imagined little imps would canter through however, it appeared to be a rather basic maze, more of just a couple of hedges really. Andrew selected the theme of knights and Candice went all out, with a peacock construction including marzipan feathers in mint and lemon flavours! Selasi was taking the theme of this week very seriously, his research was thorough, recreating the battle of Bosworth Field where Richard III was killed. The cameras panned to 'nice' shot of Andrew's jousting knights uncovering some, let's say, unfortunate, yet bold last minute placement. Meanwhile, Jane has our permission to swan around after presenting her beautifully baked genoise sponge with marzipan decor fit for Henry VIII. [caption id="attachment_9108" align="aligncenter" width="600"] 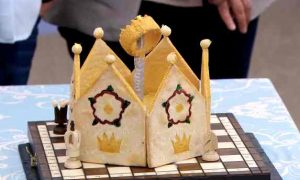 Selasi's Crown - Image: The Guardian[/caption]
Despite Selasi's investment in his marzipan crown, he missed the chance of receiving the honour of star baker. Candice won it again, her peacock, complete with a surprise filling of blueberries, was an charming touch. Mary and Paul decided to send home our beloved Benjamina, much to the surprise of the viewers who questioned the fate of Selasi, torn between their hearts and their heads. We'll miss you Benjamina!

How many people laughed ALOT at this tonight! #GBBO pic.twitter.com/cWxohZJxMr