Latest
7 healthy baking swaps WIN! 1 of 4 Camp Coffee Hampers worth £100! Sourdough; the real and the fake explained WIN! A Sourdough Baking Class at Two Magpies Bakery worth £225! How to make an octopus sugarpaste cake topper

Wedding Gowns Through the Ages is an exhibit of elegant, wedding dress inspired cakes featured at this week’s Cake International. “Wedding Gowns Through the Ages” is an exhibit of elegant, wedding-dress inspired cakes featured at this week’s Cake International competition at Alexandra Palace in London 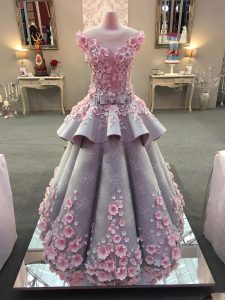 Image: Emma Jayne Cake Design[/caption]
This talented entry created by world-renowned Emma Jayne Cake Design is one for the ages, though. This life-size creation is generating tons of attention, and, well, it clearly is one of the most outstanding cakes at the competition this year. Emma Jayne Cake Design re-created a stunning bridal gown by couture designer Mak Tumang, and results had jaws dropping and onlookers confused about whether they should be shopping or salivating. The gray-and-pink organza ball gown features floral appliqués throughout the bodice and skirt, and, to be honest, looks edible in its original form, so it must have been a natural for the cake designers.

The dress is no longer available on Tumang’s website portfolio, but it’s selling for 30 percent off on third-party websites like DHGates. The dessert version of the dress is so excellently executed that it’s hard to differentiate the two in pictures. “I saw this beautiful dress yesterday. Well done,” said one Facebook fan who had seen the work up close and personal. “OMG!!!!!!! This has to be THE most beautiful cake I’ve ever seen EVER!!! Such immaculate detail, all those flowers all that work …… wow,” another fan commented on Cake International’s Facebook, where it reached over 1,000 likes.
In order to create the couture cake, artist Emma Jayne herself used a prototype for the innovative dragéekíss cake-decorating tool to nail the finer points of the intricate design, such as the individual application of pearls. [caption id="attachment_13468" align="aligncenter" width="600"] 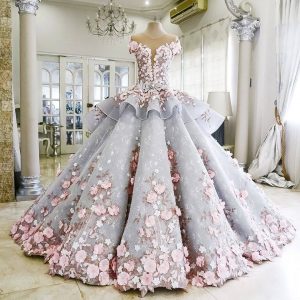 The original dress[/caption]
Also featured at Cake International’s display — which is alternately being marketed as “Wedding Gowns Through the Decades” — are impeccable tabletop reproductions of elaborate wedding gowns. Emma Jayne’s masterpiece, though, takes front and centre stage. Emma Jayne’s other notable and eclectic cake designs include impeccable floral designs, cakes that realistically replicate a Michael Kors bag, and even a sugar-sculpture recreation of a character from Disney’s film Avatar. Cake International hosts the world’s largest cake competition, says its website. “If you love cake decorating and cake art, then join us and take part in a competition that celebrates the ever-evolving skills and creativity of cake decorators across the globe!” The company calls Jayne’s creation “one of the most beautiful cakes we’ve ever seen. This story first appeared on Yahoo Style
Content continues after advertisements