he Taste of Le Cordon Bleu Patisserie workshop was an intense six-hour blend of tutorial and practical learning – there was an awful lot packed in... 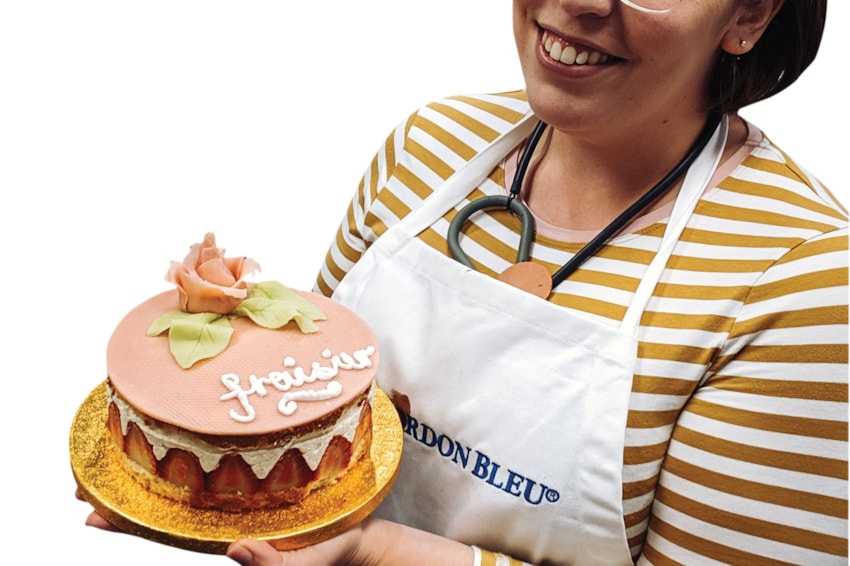 From making Genoise sponge and crème patisserie, to crafting a marzipan rose and baking a chocolate fondant, the course covers many of the key techniques to creating perfect pâtisserie. We sent Amy Gerrish along to experience it first hand... THE COURSE: Taste of Le Cordon Bleu Patisserie (£230) DURATION: 1 day (8am-2pm) LOCATION: Le Cordon Bleu London 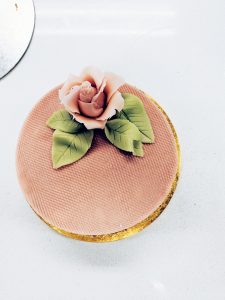 Sitting on Bloomsbury Square, Le Cordon Bleu London is nestled within a stunning 19th-century terrace. While the outside is haughty London in all its historic glory, the inside couldn't be more different. White walls decorated with the names of renowned Le Cordon Bleu alumni and fingerprint-scanner access gates greet you when you first step inside. All of a sudden, there’s an overwhelming feeling that – whatever you’re about to embark upon – isn’t going to be your typical cookery class.

This feeling was right, but in the best of ways. The Taste of Le Cordon Bleu Patisserie workshop was an intense six-hour blend of tutorial and practical learning – there was an awful lot packed into that time! Led by Chef Olivier Mourelon, the demonstrations were well-paced and frequently gave far more detail than was written in the recipe. These expert tips were almost certainly the difference between a standard bake and something truly exceptional – and this advice really does feel invaluable! There was a lot of information to take in but, in the last hour, everything suddenly came together like a nearly-completed jigsaw puzzle. Except, in this case, the puzzle was, in fact, a beautiful Fraisier cake (think Genoise sponge with crème mousseline, topped with pink marzipan decorated with fresh strawberries and a marzipan rose) and a delectable chocolate fondant with Chantilly cream. Creating the many, many component parts of the Fraisier cake is what took the majority of the day. Making the notoriously challenging Genoise sponge was the first order of business (talk about being thrown in at the deep end!), followed by a very thick creme patisserie which was then to become creme mousseline through the addition of butter (very sift) and Kirsch (a good glug). 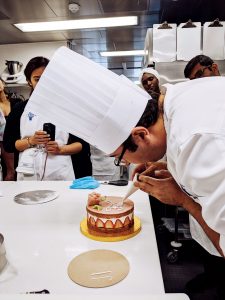 Chocolate fondants came next, while the Genoise was baking, and the crème pat cooling. As Chef Olivier pointed out, the fondant mix can be made well ahead of time and frozen, until you need it. The tricky part of the fondants isn’t so much making them, it’s the cooking. As soon as the top is a little domed and the sides are pulling away from the baking tin, it’s time to get them out of the oven. Sliding a spoon into one should reveal molten chocolate which pools on the plate – absolute heaven! Assembly and the decoration of the Fraisier cake felt like a rather delicate task, though Chef Olivier made it look incredibly simple. The reality? It wasn’t too bad, and it seemed like the whole class were proud of their Fraisier cake efforts! Once popped in a cake box – along with the unused fondant mix in a piping bag – we were able to take our treats home. And boy did they taste good with a cuppa! Amy Taste of Le Cordon Bleu Patisserie and other short courses run throughout the year. Take a look at what’s on offer at www.cordonbleu.edu/london/cooking-short-courses

Read more from Le Cordon Bleu including tips and advice