Latest
Royal icing made simple: Renshaw Academy's guide to easy decorating Maryland cookies How to create a chalkboard effect cake Around the world in 100 cake ingredients How to start an online cake business part two – 6 ways to win on Google

The Great British Bake Off celebrated all things dessert in Dessert Week. Dessert Week couldn't have come at a better time. 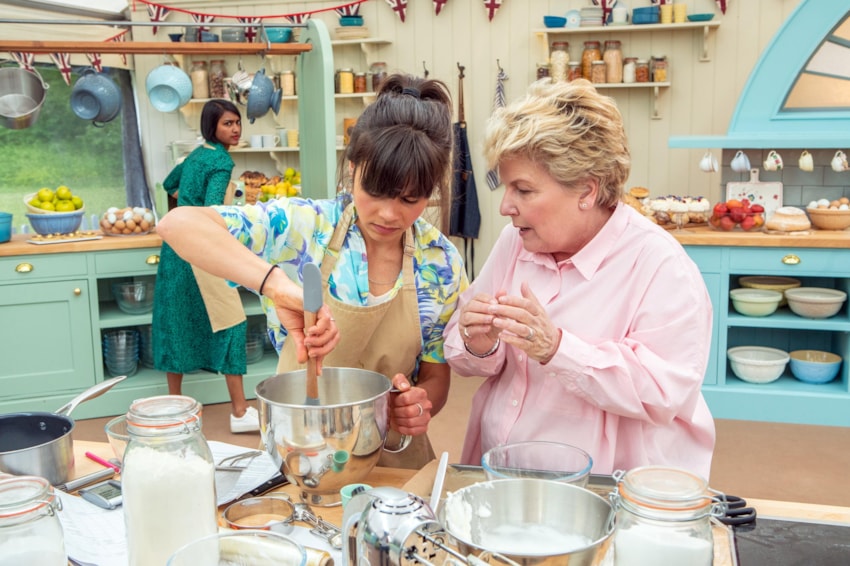 Dessert Week couldn't have come at a better time. Post 'dairy' and '1920s', it was nice to get back to some old-fashioned baking. Or so we thought... *WARNING – CONTAINS SPOILERS*

For the first bake of the night, the bakers were asked to make a meringue cake, with a minimum of three layers. Prue offered some sound advice, which was sure to be ignored... https://twitter.com/innocent/status/1179109611925917696 Most of the remaining seven bakers turned to nuts, with pistachio being a favourite with Henry and Steph. David went with a mived spice, Rosie chose salted caramel and Alice went nut-free with a black forest gateau flavour. Creating the layers was tense to watch, as meringue is notoriously fragile. Henry continued to delight, as he showed his support for last weeks departees Michelle and Helena with brooches. https://twitter.com/BritishBakeOff/status/1179111345909833728 The judges didn't hold back as they found most of the meringue cakes wanting. David's mixed spice was "overwhelming, and Rosie's chocolate was too thick and "wonky". Priya's blueberry amaretto cake failed to impress as Prue and Paul found the colour "horrible" and unappetising. Not only that, but she had overbaked the meringue inside. https://twitter.com/BritishBakeOff/status/1179113046859534336 Alice's meringue basket was described as "charming", but needed a punchier cherry flavour. Michael's presentation was also good, but the meringue itself was "sweaty", according to Paul. Oh dear. However, Steph's cake was deemed "beautiful" and "professional-looking" by Paul. Just a shame there were too many nuts inside. Lastly, Henry's was "slightly messy" but overall both judges really liked it. Paul even liked his jam - which he did make himself - "The cheek!" https://twitter.com/scottygb/status/1179114228160094209 https://twitter.com/HanInHeels/status/1179118430596878337 [caption id="attachment_23115" align="aligncenter" width="600"] 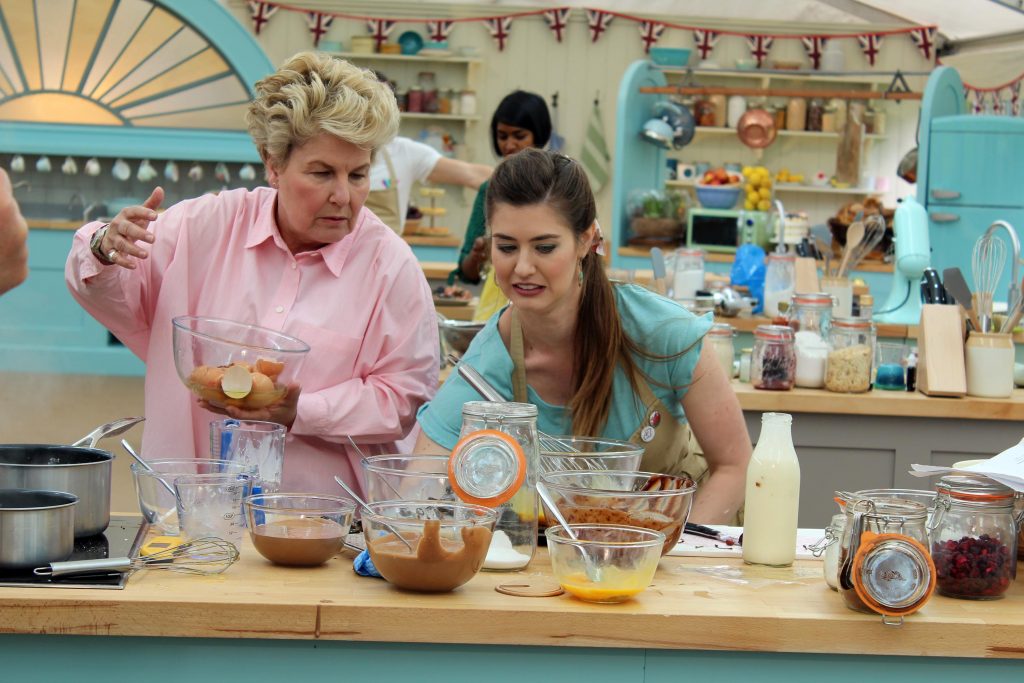 Next up, Prue set the challenge of making verrines - a six-layered dessert in a glass. The bakers were, understandably, stressed. https://twitter.com/Channel4/status/1179114916566818816 The layers included mango compote, raspberry jelly and panna cotta. This challenge involved a lot of 'chilling' as the bakers ran frantically between the fridges. The danger was that if each layer wasn't set properly they may go straight through each other. The verrines were decorated with biscuits, balanced precariously on top of the glasses. It made for a tense walk to the judging table... https://twitter.com/BritishBakeOff/status/1179116137767997441 The judges were mainly impressed with everyone's efforts, but Priya ended up coming 7th, with Alice winning with a "near-perfect" dessert. [caption id="attachment_23116" align="aligncenter" width="600"] 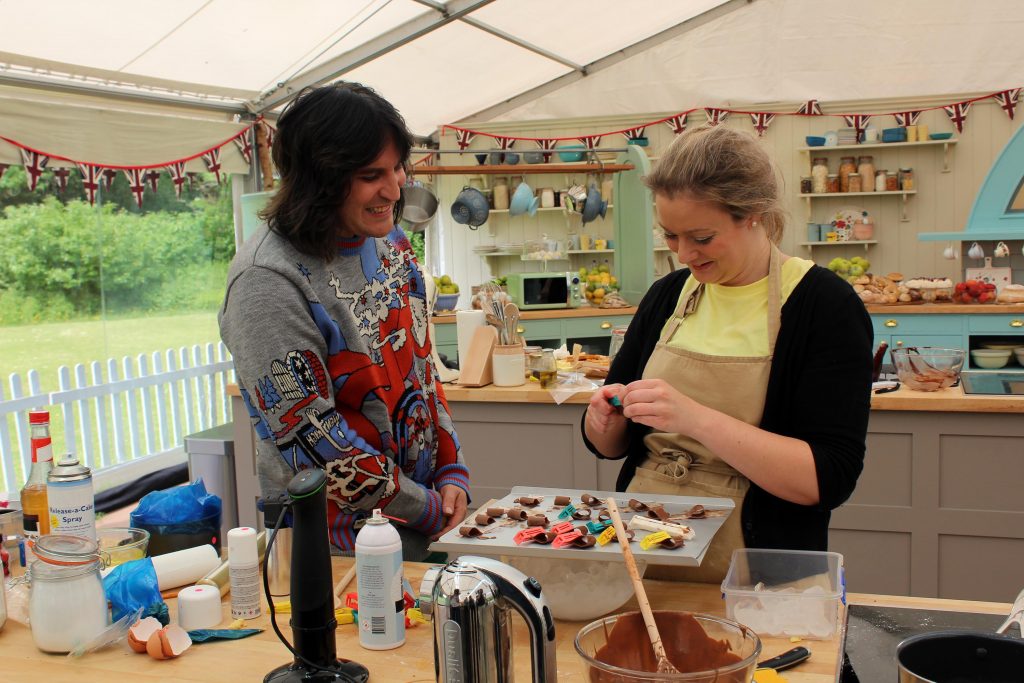 The last challenge of dessert week was to create a celebratory bombe! Michael opted for a black forest flavour with chocolate cherry meringue on the outside. Paul's poker face was in full force as he tried it - leaving no clues as to his thoughts. Alice was making a tiramisu bombe with espresso and spiced rum flavours, while Priya chose a summer fruit flavour with a liqueur soaked sponge lining. Steph chose not to line her bombe with a sponge, but with chocolate mousse instead, with a 'mirror glaze' on top. Henry had a clever idea for his 'bonfire' bombe, using carboard circles to separate the layers - allowing him to set them all at once. The bakers were left nervously waiting to see if the layers would set in time. They had to be in the fridge long enough to set while leaving enough time for decoration. https://twitter.com/BritishBakeOff/status/1179120295942279169 David was particularly worried about his lemon and shiso leaf sorbet, as many had chosen 'easier' mousse or jelly layers. When it came time to get the bombe's out, many struggled. Alice really seemed in trouble. https://twitter.com/Channel4/status/1179122257324470272 https://twitter.com/BritishBakeOff/status/1179121378190135298 When it came to the judging, Steph's mirror bombe really impressed. Paul said it was "one of the best things I've had to eat for a long time", which was followed by applause in the tent. https://twitter.com/BritishBakeOff/status/1179124941595250688 Rosie's red ruby bombe was "very colourful", reminding Paul of Noel! David's was descrobed as elegant and unusal, while Michael's looked "like something straight from the 1970s sweet trolley". Or "the Queen Mum's hat" added Prue! Alice's tiramisu bombe was "a triumph", but while Priya's bombe looked good, it only tasted "ok". Henry seemed to have created an igloo, much to everyone's amusement! However, the judges didn't enjoy the taste as the cake was "tough" and the flavour "bland". https://twitter.com/BritishBakeOff/status/1179123924736643077   Wrapping up the night, Steph was once again made Star Baker – making that three weeks in a row! Unfortunately, another baker had to go and this week it was Priya. https://twitter.com/BritishBakeOff/status/1179126806953283589 Herny and Michael were relieved, with Henry admitting he had already decided what he was going to steal from the tent, and Michael commenting he had been flirting with the bottom! https://twitter.com/bubblexscum92/status/1179127050046787585 Next week is Festival Week - and the preview looked, um, interesting! See you then.