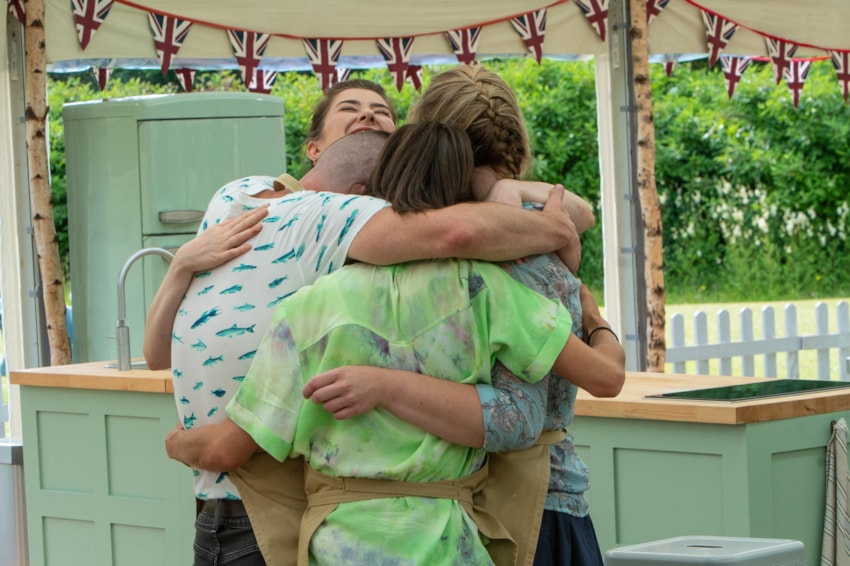 It's the semi-finals and we're down to the final four - who will make it through to the final? Patisserie week means french pastry and sweets and this week we have tartlets and gateuax. https://twitter.com/innocent/status/1186721619441602560 *WARNING – CONTAINS SPOILERS*

First up for this week, pastry makes a return, as the bakers are asked to make a sweet pastry domed tartlets. As we first see the tent, we see the bakers (and Sandi) are all wearing ties – in tribute to Henry who was sent home last week. What an adorable start to the episode. https://twitter.com/scottygb/status/1186720031217983495 Alice decides to make mocha hazelnut tartlets, which Paul seems to like the idea of. Steph and Rosie are using pâte sablée pastry for their tarts, with Steph choosing a raspberry, lemon and white chocolate combination. Rosie also goes for raspberry and lemon, but with the added twist of yuzu jelly, made from the Chinese citrus fruit. David is making alcoholic aperitif jelly with roasted rhubarb. After last week's shock departure, many online felt that Rosie should have gone home instead of Henry. It seems Noel was having similar thoughts as he greeted Rosie... https://twitter.com/Channel4/status/1186721345763020800 Jokes aside, Noel and Rosie really got talking this episode, having notable chats including "what's the biggest animal you've castrated?" To which the answer is "a giant bull". Back to baking, both Steph and David concentrate on their white chocolate mirror glazes on their tarts. Filmed in the Summer, it is getting quite hot in the tent once again, and if the domes don't set solid, it will be impossible to get them out of their moulds without damaging them. The tension, much like the heat, rises. As the time comes to an end, Steph says what we're all thinking... https://twitter.com/BritishBakeOff/status/1186722478716080134 The judges are generally in a good mood for the first challenge. Prue feels that David's tartlets look "unusual", but Paul did find fault in David's nuts. Namely, their size – "the smaller the nuts, the more professional it'll look". Let's leave that there. Rosie's creme pat was unfortunately too soft, but otherwise, the judges seemed to like her tarts. They were also harsher than usual about Steph's bake, as they didn't think her tartlets were neat enough. "The flavour is there, but it's a bit too soft", said Paul. lastly, Alice's mirror glaze may have got praise, but they didn't like her piping work. The rest though is 'stunning". [caption id="attachment_23537" align="aligncenter" width="600"] 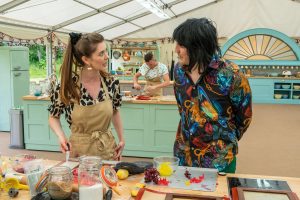 The technicals this season seemed to have got more and more complicated, and Patisserie week didn't disappoint as the bakers were tasked with making Gateau St Honore. Named after the French patron saint of bakers and pastry shapes, the bakers would need all the help they could get with this challenge.  Made from choux pastry buns, dipped into salted caramel and arranged into two layers, it is quite the creation, and a tough one according to Prue's warning. https://twitter.com/BritishBakeOff/status/1186724564597952512 The challenge seemed to get to David as he starts singing the theme tune to the retro television show 'The Shoe People', before claiming he's more of a "rough puff pastry man". The bakers dart between the counters and freezers as they attempt to make 'full puffs' of choux. Rosie, in particular, started to spiral, as everything seemed to go wrong for her. She decides to start again, as Sandi helps mop up her tears with a "choux can do it" pun or two. https://twitter.com/Channel4/status/1186728416667561984 Bake over and the judges are generally impressed. Alice comes bottom, as her cream is over whipped and caramel overdone, followed by Steph as her choux is irregular in colour and her chiboust "like scrambled egg". David's second-place curse continued, as his chiboust had split and there was sogginess in the pastry. And astonishingly Rosie came first, as while her choux buns were upside down, her gateau was "otherwise perfect". https://twitter.com/kimjoyskitchen/status/1186729467168907265 [caption id="attachment_23536" align="aligncenter" width="600"] 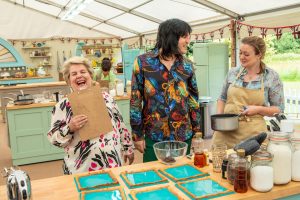 For the bakers final chance to get through to the final, the showstopper is announced as being to make "an edible depiction of something they hold precious". Oh, and this is to be incased in a sugar glass display case. No biggie. https://twitter.com/innocent/status/1186730204116463616 Rosie decides to explore the conception of time. As you do. She is making a 'Time with Family' design, with mocha creme pat and salted caramel creme. David is his usual self and is using grated beetroot and parsnip, with maple syrup buttercream to make his 'Greenhouse Growing Moss' cake. Steph's 'A Night at the Opera' cake will have six layers, coated in dark chocolate ganache with chocolate orange macarons on top. Alice has gone full Geography teacher and is making a "Save Our Oceans' cake, with lemon genoise sponge, decorated with a coral reef and *coughs* chocolate starfish. https://twitter.com/MissSammieAnne/status/1186748706051297280 To create the stunning SEE THROUGH sugar glass, they are using isomalt, which needs blow torching to create a crystal clear 'glass'. The result is really quite stunning, imitating antique glass. https://twitter.com/BritishBakeOff/status/1186735448665792517 And Paul and Prue were also impressed when it came to the judging. They found Steph's cake very pretty and neat, and they liked David's coloured 'glass'. But his cake wasn't fully level, which let him down a little, as it was "not very delicate for patisserie". Rosie's tasted a bit boring and dry, and the judges didn't feel like it was suitably 'showstopper' enough. Lastly, Alice's had lovely flavour, even it it wasn't particularly strong, apart from the raspberry. They liked her ocean theme though, and it was enough to name her this week's Star Baker! Sadly, one baker couldn't make it through to the final, and this week it was Rosie's time to leave. That means our final consists of Alice, Steph and David. See you next week for the final round-up!!