Latest
£10 tickets to The Cake & Bake Show this October! WIN! One of five ProCook Bakeware bundles worth £50! Ginger & prune scones How to make fondant koala cake toppers Around the world in 100 cake ingredients

The most disappointing birthday cake of 2018

Store-bought cakes can always be a bit hit-or-miss. Whether it's a boxed cake that's missing some key decorations, or a in-store decorated cake that... 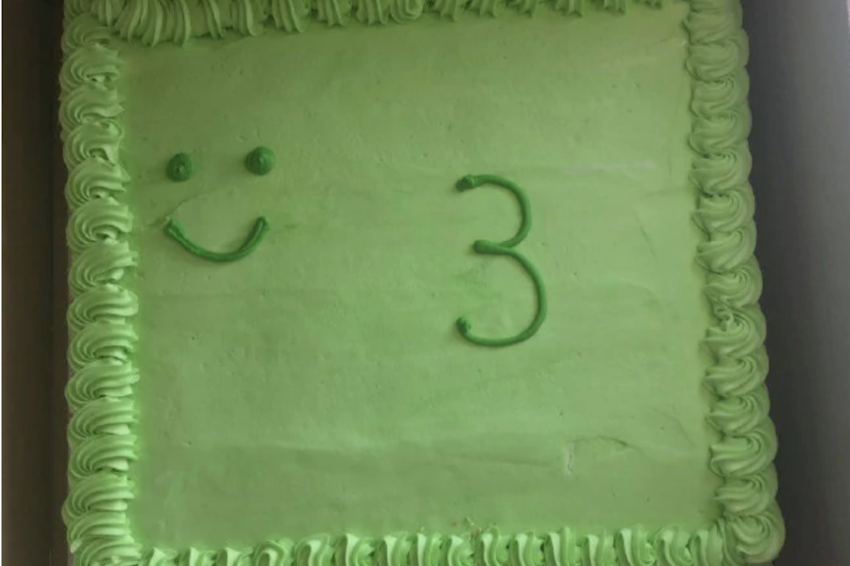 Is this the worst cake of the year?

Store-bought cakes can always be a bit hit-or-miss. Whether it's a boxed cake that's missing some key decorations, or a in-store decorated cake that hasn't arrived quite as planned, the internet isn't short of stories of woe - but we have to say, this one takes the biscuit! An Australian family has been left "seriously unimpressed" after a birthday cake order was, well, incredibly underwhelming. Three-year-old Mason had requested a frog cake for his birthday - a simple enough request. Below is what his local Woolworths store in Tamworth, New South Wales, Australia produced for that brief... Shane, Mason's father adds:

"I went down to the store three days before my son’s birthday to order the cake. I explained to them we wanted a frog theme, as my son loves frogs. "They told me it could done, no worries at all. He wrote down everything I said and said it would be ready by Sunday morning. I was very excited to see it."

Needless to say, the family were not impressed. Thankfully, a family member saved the day and managed to turn the cake into something resembling a garden pond with a frog having a splash around, so all was not lost!

"It would have taken five seconds to do,’ said Shane."I decided to just ring Woolworths to see if they could fix it. I explained the situation but was told that they didn’t 'decorate' cakes. They have other pre-made cakes for sale that all looked lovely, so I thought they would do a good job. "They do this every day for a living. Surely, they could have done something better than this."

This story first appeared on news.com.au, and was supplied the image used above.