Research undertaken by Breville has revealed which desserts the UK enjoy tucking into the most! Exploring Google search data to discover which desserts... Research undertaken by Breville has revealed which desserts the UK enjoy tucking into the most!

To find out the UK's favourite desserts, Breville put it to the people of the UK, exploring Google search data to discover which desserts Brits hold closest to their hearts. They also found that the results vary depending on the time of year, with Christmas being particularly popular for Mince Pies! So, let's find out which desserts are the most popular in each part of the UK... the results may surprise you! Scotland Let's start at the top - Scotland! The scots favourite came out as Apple Crumble, closely followed by Victoria Sponge, Jelly, Carrot Cake and Cheesecake. Northern Ireland Over in Northern Ireland, Apple Crumble also took the top spot, with Jelly coming in at second place. Victoria Sponge and Cheesecake were next, with Scones coming in 5th. Wales Unsurprisingly, Welsh Cakes were the Welsh favourites, with Victoria Sponge still a firm favourite at number two. Apple Crumble was next, with Bread and Butter Pudding and Carrot Cake coming in at 4th and 5th place respectively.

But things are shaken up a little at Christmas, as Mince Pies become a firm fave. Surprisingly, Christmas Cake has fallen out of favour, as it seems we prefer sticky toffee pudding and gingerbread. Sticky toffee pudding was also the Christmas dessert we favour most frequently at other times of the year. Gingerbread came second, with Yule logs and Panetonne also getting a look in! 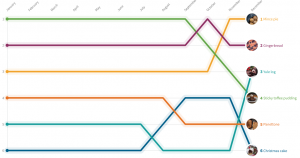 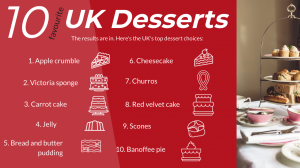