The World's Most Expensive Cake

Introducing the World's most expensive cake; a diamond studded fashion runway, complete with lights and a sound system, that must be seen to be believed! 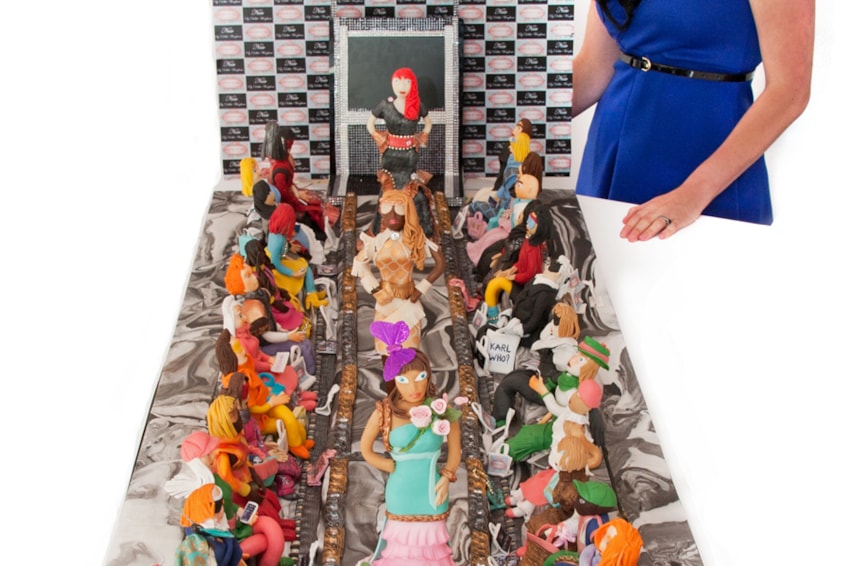 Introducing… The World's most expensive cake! Haute couturier, and Cupcake Heaven columnist, Debbie Wingham is renowned worldwide for her beautiful, extravagant gowns, and now she has traded her love for fabric for a passion for fondant, and created the World's most expensive cake! All photos © Adel Hanna Debbie is already the title holder for the world’s most expensive garment, after creating a black diamond dress and red diamond abaya, which was valued at a staggering 17.7 millions dollars. Now, the couturier turned cake master has blown the budget with a cake to rival no other, priced at an impressive £48.5 million pounds, beating the previous record holding cake, which was created by a fellow Brit, and valued at a mere £32.4 million. Debbie’s cake follows in her fashion footsteps and is comprised of a 6ft long runway cake, including long, lean and elegant models. The models clothes echo Debbie’s past designs, with the edible versions capturing her signature style of flowing gowns and strong accessories. 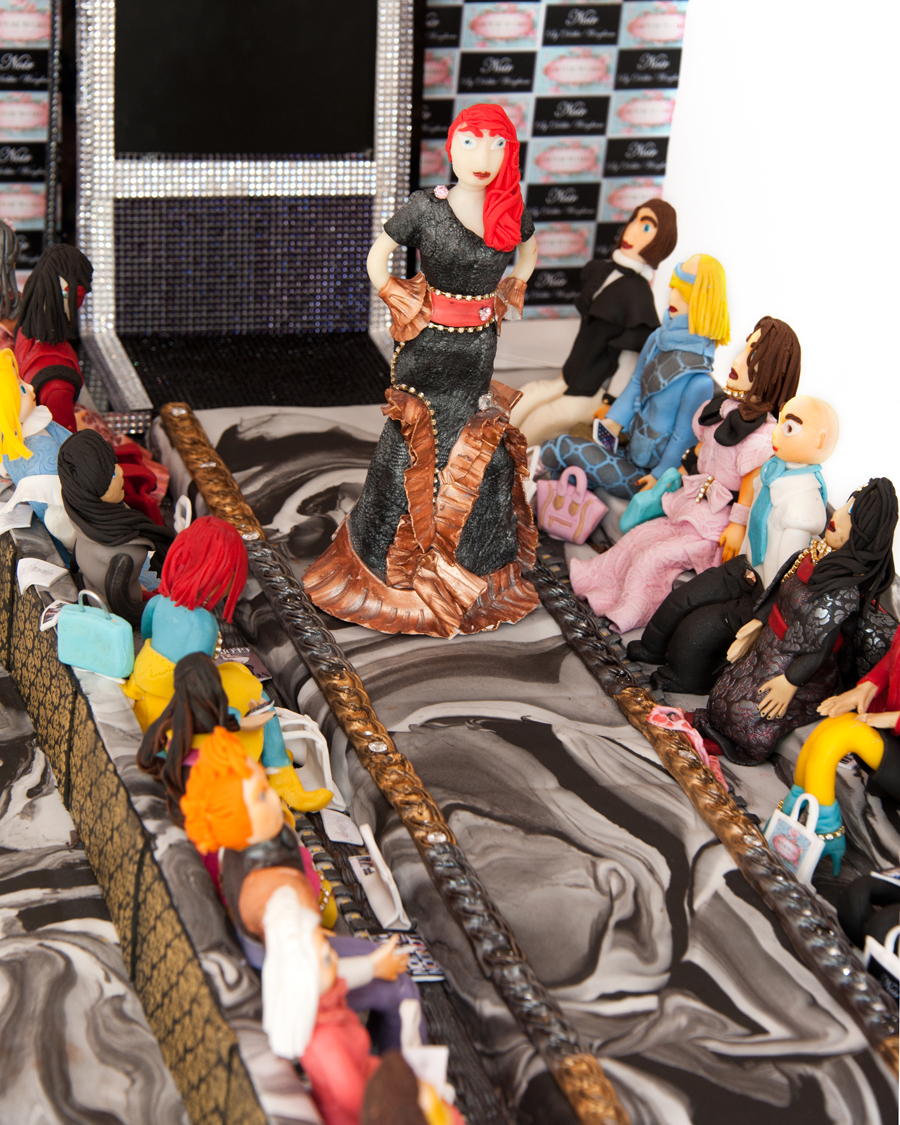 Whilst the identity of the recipient will remain anonymous, the cake was commissioned by one of Debbie’s UAE clients to showcase heirloom stones, as a gift to the client’s daughter to celebrate her birthday and engagement. Debbie was initially commissioned to design three gowns for the daughter to wear, but when the client’s confident went to pick up the dresses from Debbie’s studio, they discovered her cake room too, and so the idea for a catwalk cake which would display the stones in a fun, but elegant way was formed. And as if the diamonds adorning the cake weren't enough, the edge of the runway comes complete with working lights, a screen featuring runway visuals, and a built-in Bose music system! 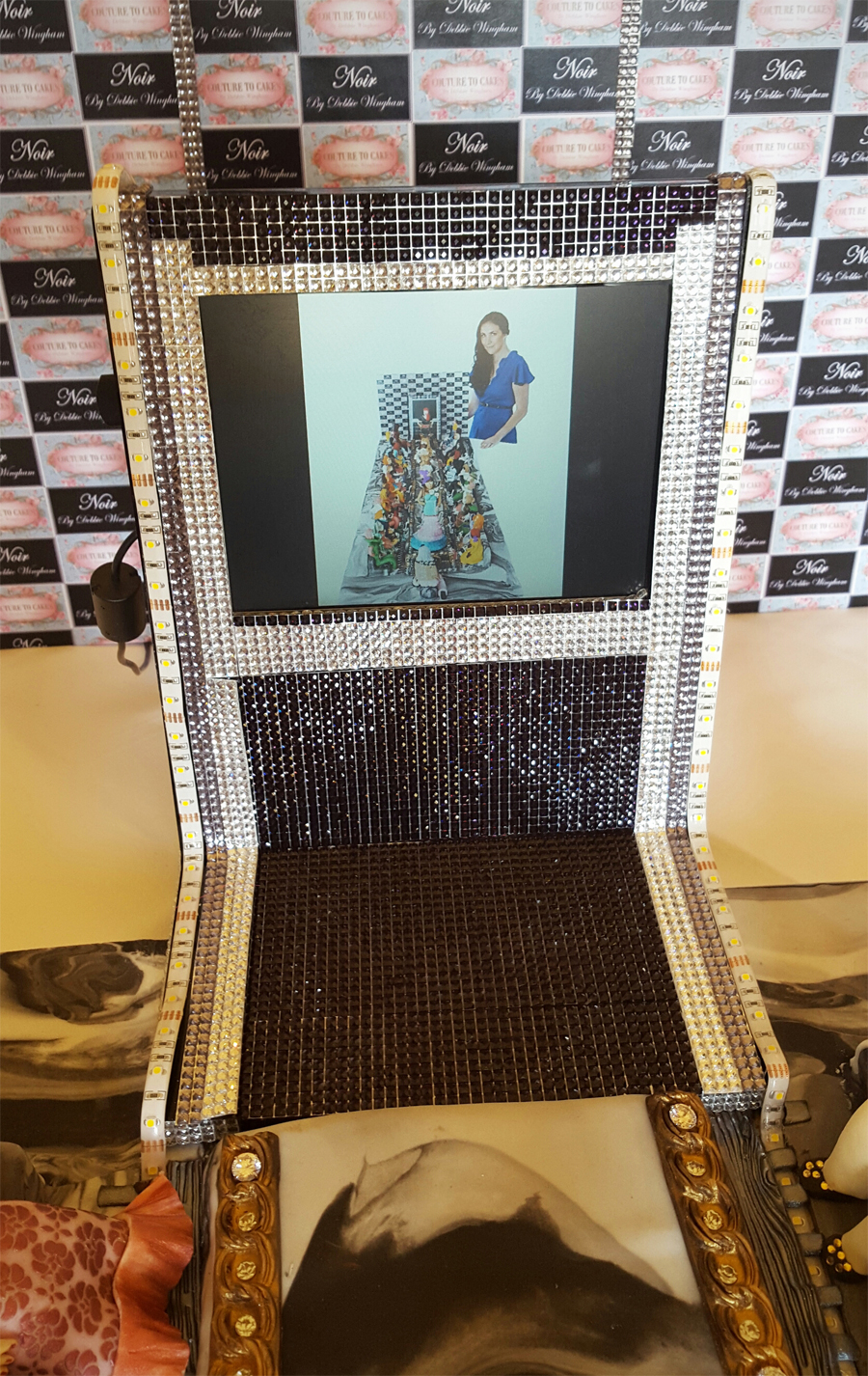 The cake itself was tailored to suit the clients daughter, and certain members of the catwalk audience were modeled on family members and close friends, although you may be able to spot a few famous faces among the crowd too! Just like on the front row of any major catwalk show, the edible masterpiece features a whole host of fabulous fashionistas, complete with designer hand bags and shoes – some are even wearing designer shades! As you would expect in a fashion week runway show, the front row are equipped with smart phones and tablets, to take photos, and update social media on the latest trends. And of course no front row is complete without a goody bag! 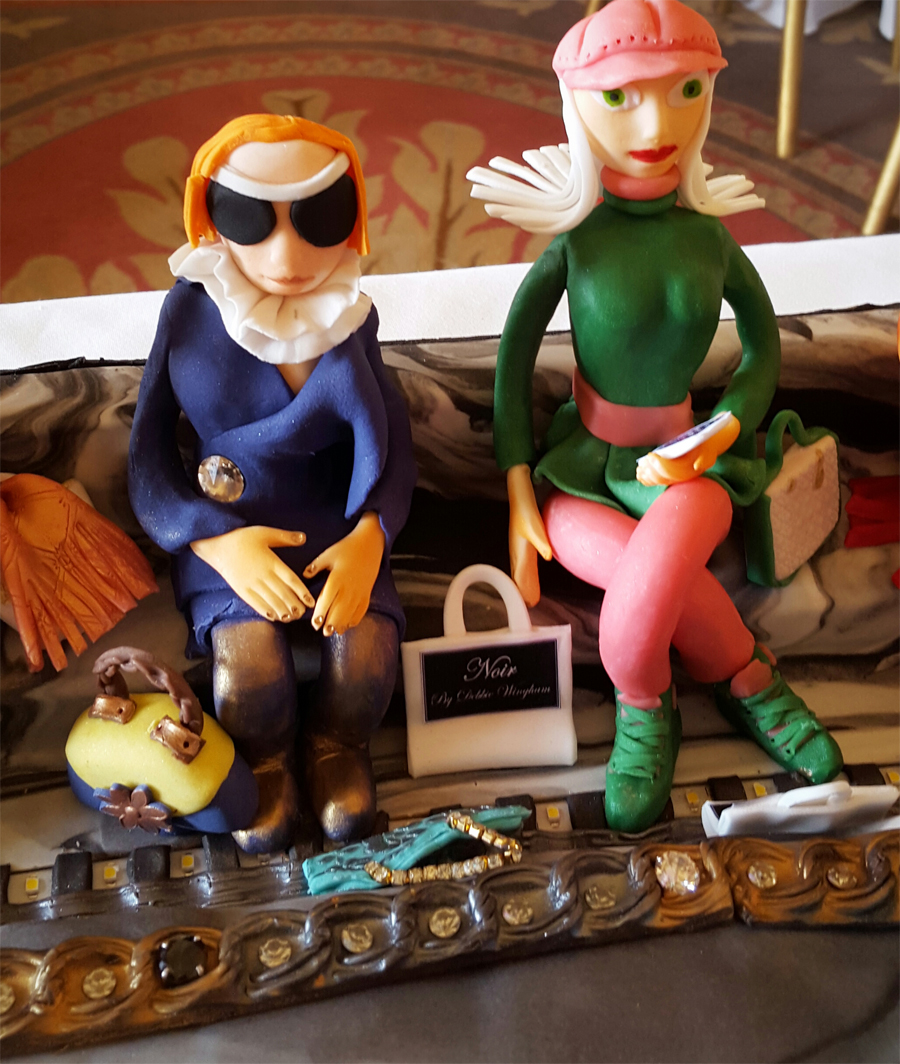 The literal frosting on the cake comes in the form of £48.5 million worth of diamonds, including a 5.2 carat pink diamond, a 6.4 carat yellow diamond, 15 individual 5 carat white diamonds, 76 2 carat black diamonds, and 62 2 carat white diamonds. All of these are accompanied by 4,000 stones, including amethysts and emeralds. The stones were attached to the cake in a style similar to Debbie's fashion designs, using platinum settings in order to add impact and value, but this time were attached with icing rather than being stitched in real gold thread! 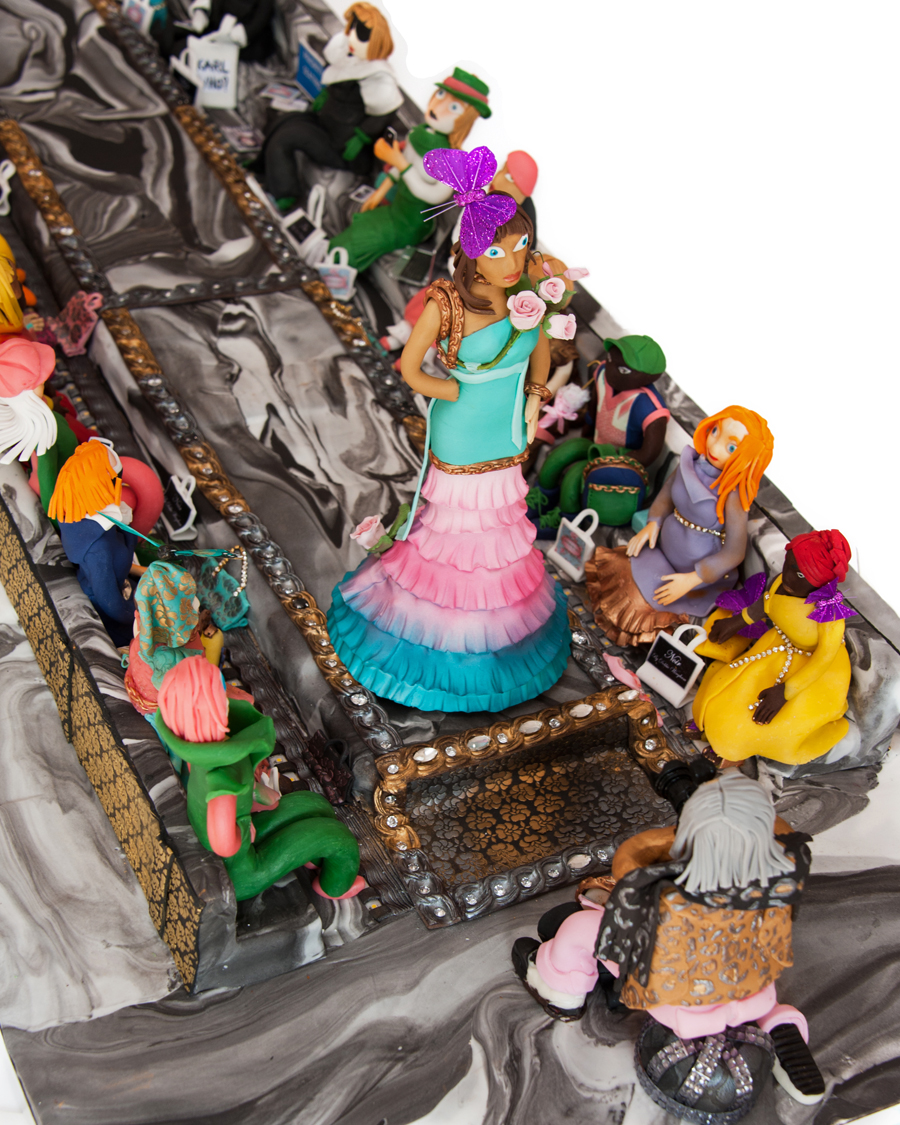 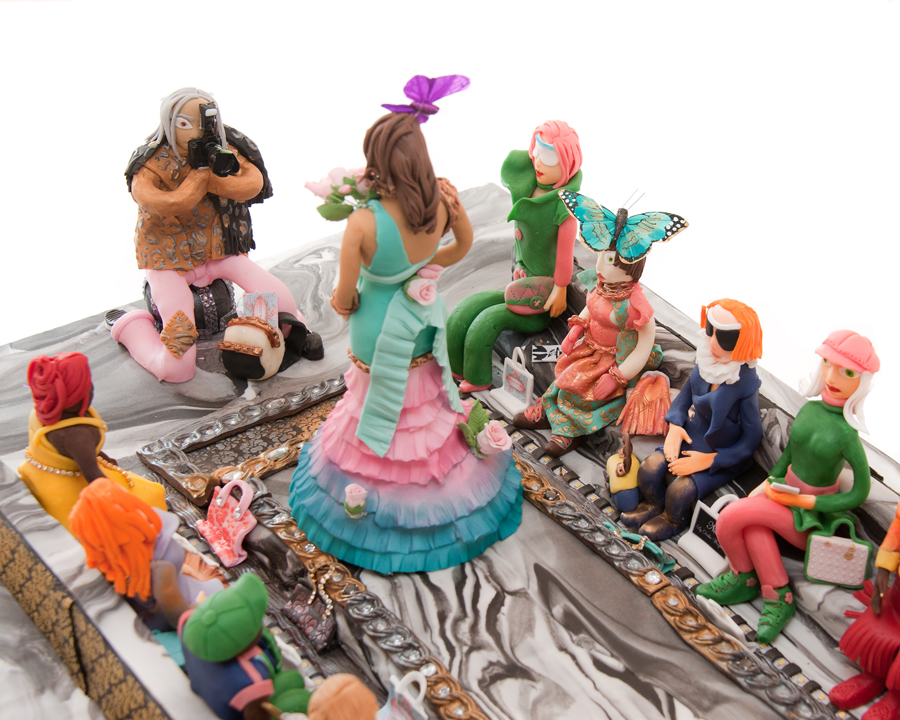 Every piece of the cake was hand sculpted by Debbie, taking over 1,100 hours to complete. It has over 120kg of fondant icing and 60kg of modeling chocolate, which was mainly used for sculpting, along with 80 different airbrushed colours and effects! The cake weighs a massive 450kg, which is the equivalent of a male grizzly bear, although the cake is decidedly more glamorous! The question is, what will anyone wanting to break this record have to do next? This impressive cake will certainly take some beating! 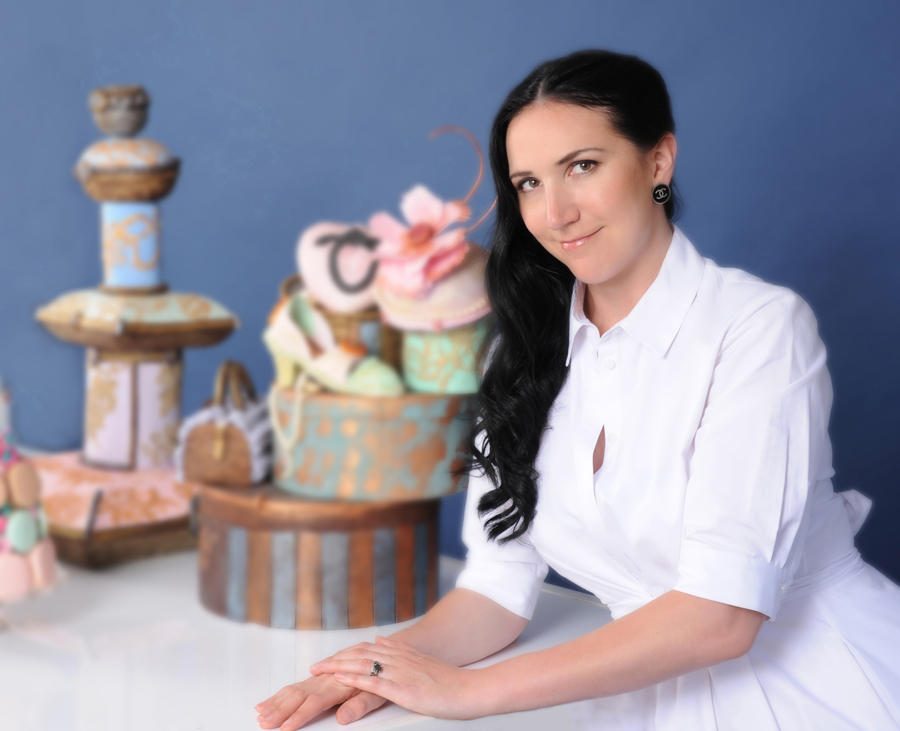 Debbie Wingham still has an active involvement in the fashion industry, but now has also launched her own cake company Couture To Cakes. She has two high-profile wedding cakes to create before the end of the year, and her clients include Amanda Holden, the cast of Downton Abbey, ITV, and various corporate clients. To find out more about her cakes, visit www.couturetocakes.com