These cakes are made out of vegetables

Imagine taking a mouthful of delicious sweet cake but instead you get a big bite full of fresh flavours like celery, carrot and cabbage. 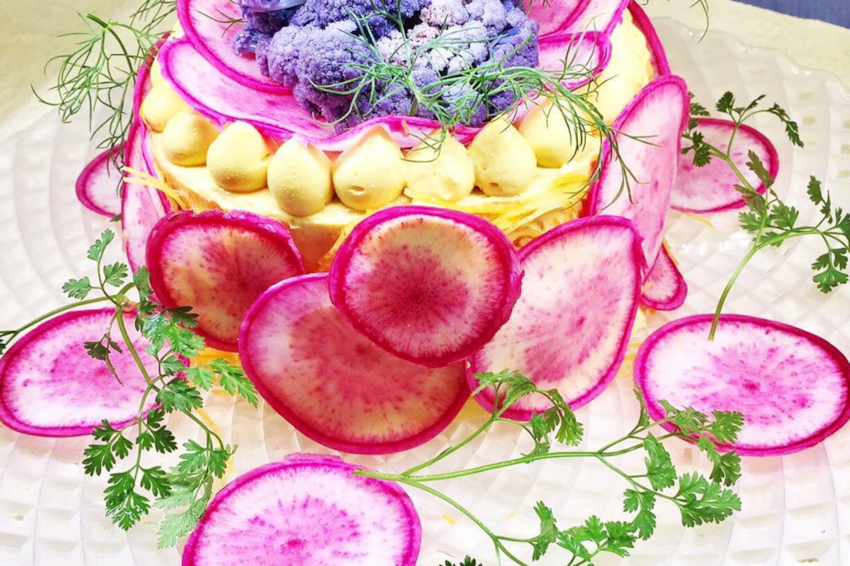 Imagine taking a mouthful of delicious sweet cake but instead you get a big bite full of fresh flavours like celery, carrot and cabbage.

"Salad cakes" are the new trend in Japan! Nagoya native Mitsuki Moriyasu, a cafe owner and food stylist, in 2015 invented what she calls the "Vegedeco Salad" (decorated vegetables) a sinless sweet alternative to traditional baked goods. These guilt-free sweets replace cream "frosting" with tofu, and they substitute a "sponge" base for one of soy powder, eggs and vegetable oil, while the rainbow hues that decorate the "icing" come from natural vegetable colourings such as red beetroot juice. Marinated, diced and cooked vegetables such as radish and daikon replace the sponge, while this wheat-free creation uses a traditional Japanese yeast to achieve a subtly sweet flavour. "It looks like a normal cake -- but it's made of only veggies. You can have it for breakfast, lunch -- and it's very suitable for dinner with wine," Moriyasu tells CNN. "Each cake tastes different, depending which vegetables we use -- but I would say it tastes like something you've never had before."
[caption id="" align="aligncenter" width="660"] Image: CNN[/caption] So how did this idea for "salad cake" come about? It was inspired by a desire for healthy eating. Moriyasu's two sons have food allergies and so for years she had been trying out new things with recipes, to find alternatives for sugar and wheat.

"We had homemade meals as I wanted them to eat lots of vegetables, and not take too much sugar," she tells CNN.

Moriyasu noticed the positive changes that a low-sugar and gluten-free diet made to her own body. "I felt more refreshed, my mind was calmer, and I was concentrating better," she says. "I decided I wanted to make something that looks cute, and also has lots of vegetables. So I made a cake -- but with lots of veggies." After she posted the salad cake online, word began to spread and customers flocked to her cafe in Nagoya. "They are colourful and gorgeous ... and the customers enjoy eating them." A slice of salad cake that serves one has 193 calories, says Moriyasu. For comparison, the average 90g slice of chocolate cake without frosting has 340 calories, according to weight management organization CalorieKing. Since the Vegedeco Salad's debut, Moriyasu has created around 50 designs. "I look at the different vegetables and try to pull out their best characteristic," Moriyasu says. "My inspiration comes from when I think about the shapes and combination of colors of different vegetables." It takes Moriyasu about an hour to make a salad cake. The key in making it stick together is marinating the vegetables beforehand. So what is the most quirkiest combination Moriyasu has ever done? "I think it was the salad cake that used matcha (finely ground green tea powder) in tofu cream -- it was a very unique taste."
[caption id="" align="aligncenter" width="660"] Image: CNN[/caption]
The biggest age group to visit the cafe, Moriyasu says, are customers in their 30s. A huge part of the salad cakes' appeal comes from their appearance -- a significant aspect of Japanese dining culture.

"Food is, and has always been, a place for creativity and innovation in Japan. Salad cakes are just one manifestation of food play in that nation."

Indulging in something tasty that is healthy has an obvious appeal to Japanese women, White explains. To White, these salad cakes show that there are "infinite possibilities" in Japanese food.