We are currently performing essential maintenance work and therefore some parts of the site are currently inaccessible. These include the user registration/accounts areas, competition entry, basket and checkout. We apologise for any inconvenience and normal service will be resumed very soon. Please enjoy browsing the rest of the site while we complete this work.
Latest
Toffee apple tart How to make a sugarpaste crab cake topper Introducing our brand-new magazine… Bake & Decorate! 7 healthy baking swaps WIN! 1 of 4 Camp Coffee Hampers worth £100! The piece is part of “The Cakeland Fête Noir,” an impressive installation of large-scale, faux-cake sculptures and new paintings.
The artist, who became famous for his “Cakeland” display in a $1,500-per-month North Oakland shop window that he occupied for eight years, moved to Southern California when the building was being refurbished. He also created immersive experiences at Banksy's Dismaland. [caption id="attachment_11275" align="aligncenter" width="300"] 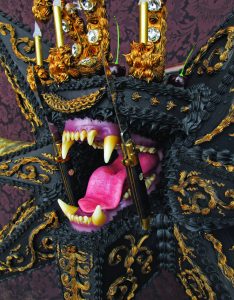 At Banksy's Dismaland. Image: The Art of Scott Hove/Facebook[/caption]
As in many of his works, “The Cakeland Fête Noir” is light and dark at the same time. The pieces, which are elegantly frosted in pink and look tempting yet they include sinister objects such as bones, fangs and things Hove says are “not very cake-like.” There’s nothing unusual found in his materials, however, Hove combines found objects with store-bought items “you can get at the hardware store or the craft store” to create his installations. He says, “It’s just [a matter of] what I do with those things”
Viewers have strong responses. Hove says, “All the saturated colours have a really strong emotional pull inherent in cake decorating that really attracts people. They’re drawn to … what cake represents.” After the initial attraction, they notice the darker spaces and get hooked by “an emotional counterpoint,” Hove says. [caption id="attachment_11279" align="aligncenter" width="480"] 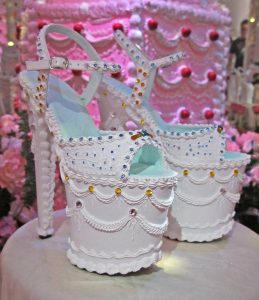 Image: Cakeland in California. Image: Tova Lobatz/Facebook[/caption]
Despite what Hove calls his “Northern California prejudices,” he’s found the art community in Los Angeles to be open and welcoming. He says, “Being an artist in the Bay Area is like being in a life raft. In L,A, being an artist is like being on a ship.” Still, he considers himself a San Francisco artist, inspired by the city’s unique architecture. Also featured will be a large-scale video installation infinity chamber featuring a 9,000 square foot installation and collaboration with Bakers' Son and Cirque du Soleil. This story first appeared on The San Francisco Examiner
Content continues after advertisements