Tweets about #Baking have risen astronomically since Bake Off began

The year before the Bake Off began in 2010, it was already clear to see the baking craze was on the rise, tweets and talk increased & look what happened... 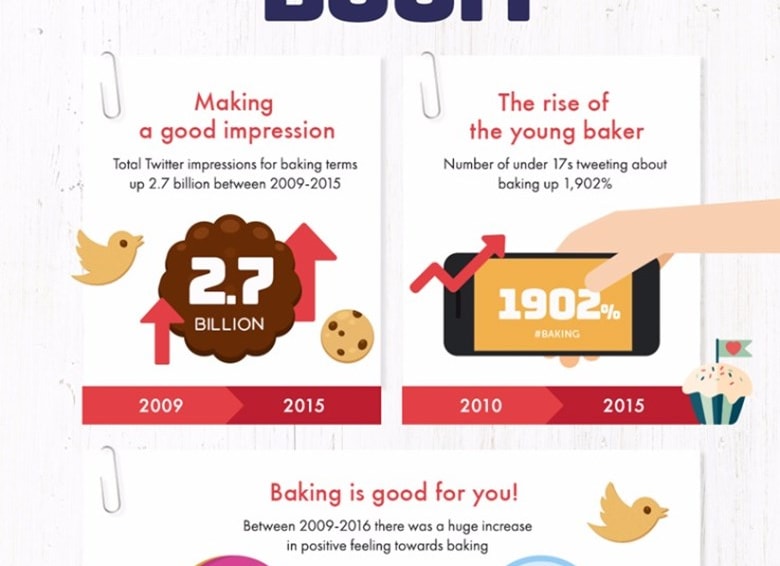 The year before the Bake Off began in 2010, it was already clear to see the baking craze was on the rise... 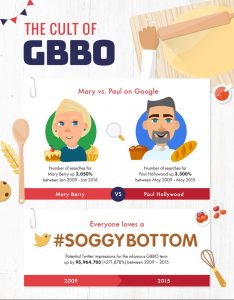 We've loved The Great British Bake Off, it's a show very close to our hearts and it feels like the end of an era with the move from the Beeb to Channel 4, so let's just reflect on this baking obsession for a moment... From 2009 to 2015, tweets about baking were up by 595,127 in the UK – an increase of 3,976%, as people took to social media to talk about it. Noticing this growing trend, Currys PC World and Neff decided to carry out a study to find out more about the rise of baking in the UK.

What did they find?

By looking closely at baking trends on Twitter and Google from 2009 until the present day they firstly recognised 2010 would be a significant year – the year that the BBC’s ‘Great British Bake Off’ first aired. Since the show launched, there has been a notable rise in conversation among younger bakers. By 2015, there had been a 1,902% rise in under-17 year olds tweeting about baking compared to 2010.   The increase in the popularity of baking and GBBO are clearly linked. As the show has become more popular, negativity in baking discussions has dropped by 8%, while joy has increased by 17%, what a happy stat! More than that, searches for ‘baking’ increased by 82% during 2010-2011, and GBBO-relevant search terms are up too including ‘Mary Berry’ (+2,050%), and ‘Kouign-amann’ (a Breton cake featured in series four of GBBO) which suddenly went from 1,000 monthly searches to 16,667! The best bit of research found that, the now infamous ‘soggy bottom’ term saw a rise of 95,964,703 potential Twitter impressions between 2009-2015. But it's not over yet, it's forecasted that baking will continue to be popular (cue – little jump for joy!), with potential Twitter impressions concerning baking likely to go over 3 billion by 2017. However, it was announced that the show would move to Channel 4, negative tweets about the show have increased by a huge 42%, sad times. It's a crazy period for TV, baking and of course, passionate individuals like us, but we're certain that we'll never stop wanting to see tasty treats right before our square eyes! This research first appeared on TechTalk Currys