How To Pipe Cupcakes To The Perfect Finish

Need to know the best way to ice a cupcake? Learn how to put frosting on cupcakes for the perfect finish with a super handy video tutorial from CD&S! Knowing how to ice a cupcake may sound simple, but it’s a surprisingly tricky skill to master! So, CD&S are here to show you how to put frosting on cupcakes and tell you when to ice cupcakes (you don’t want a melted frosting disaster!). Don’t get your icing bag in a twist; CD&S have all the guidance you need on the best ways to ice a cupcake!

"When you look at a cupcake, you've got to smile."
Anne Byrn, cookbook author

How To Pipe Cupcakes To The Perfect Finish 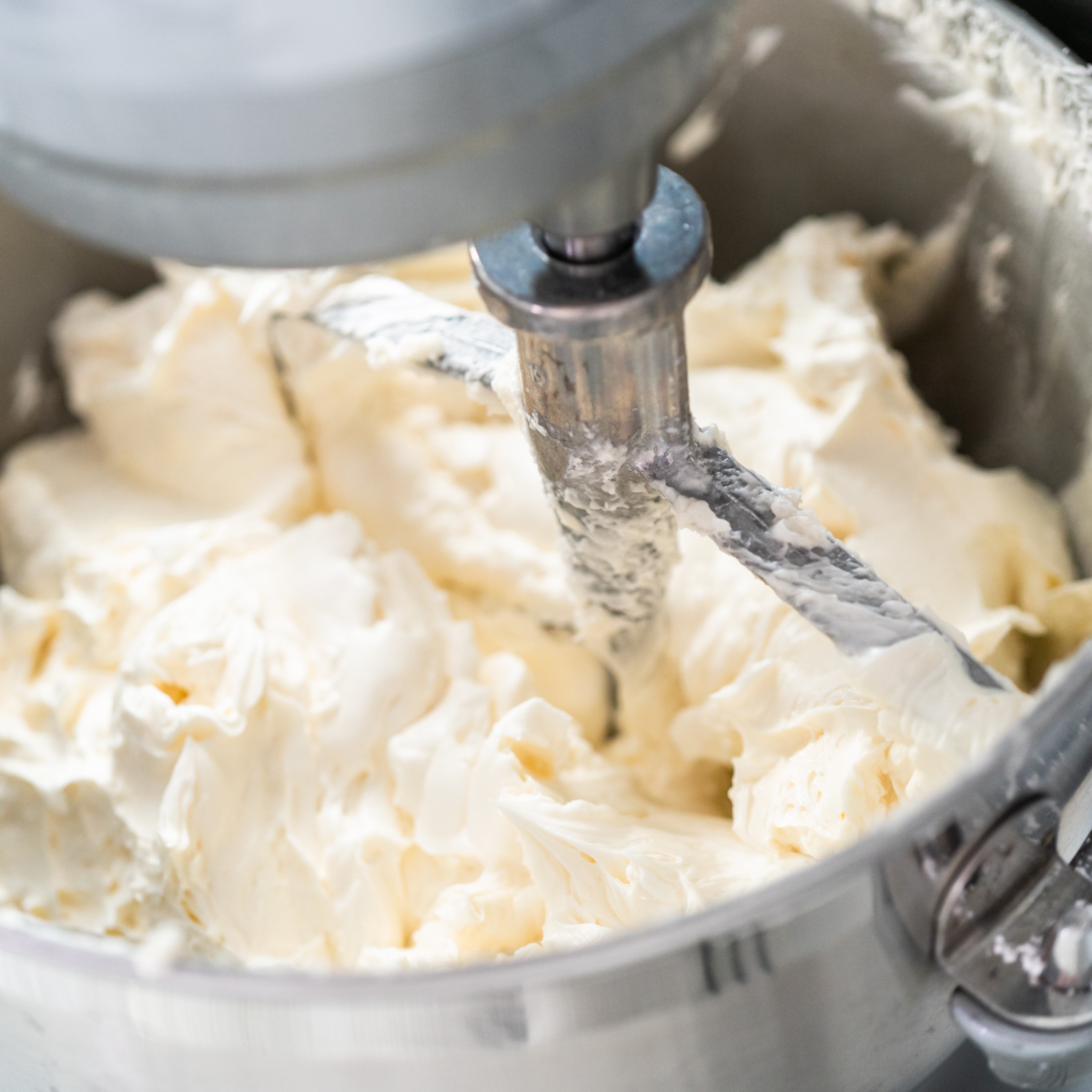 While we’re sure most people reading this can make a decent buttercream balancing on their heads with their eyes closed (we’d love to see pictures of it!), CD&S contributor Charlotte White shows you the best way to make icing for cupcakes.

This recipe makes enough frosting to cover 12 cupcakes or fill and cover a 20cm cake. Simply multiply/divide as required for more/less cupcakes!

1 Roughly carve up the butter and beat in a freestanding mixer for 3 minutes until creamy. You can also do this using a handheld electric mixer or by hand, although you’ll find that the latter takes much longer (hand mixing is a fun type of workout at least!)

2 At this point, you can add your desired flavouring: vanilla, chocolate, lemon or caramel.

4 Add any food colouring you desire! 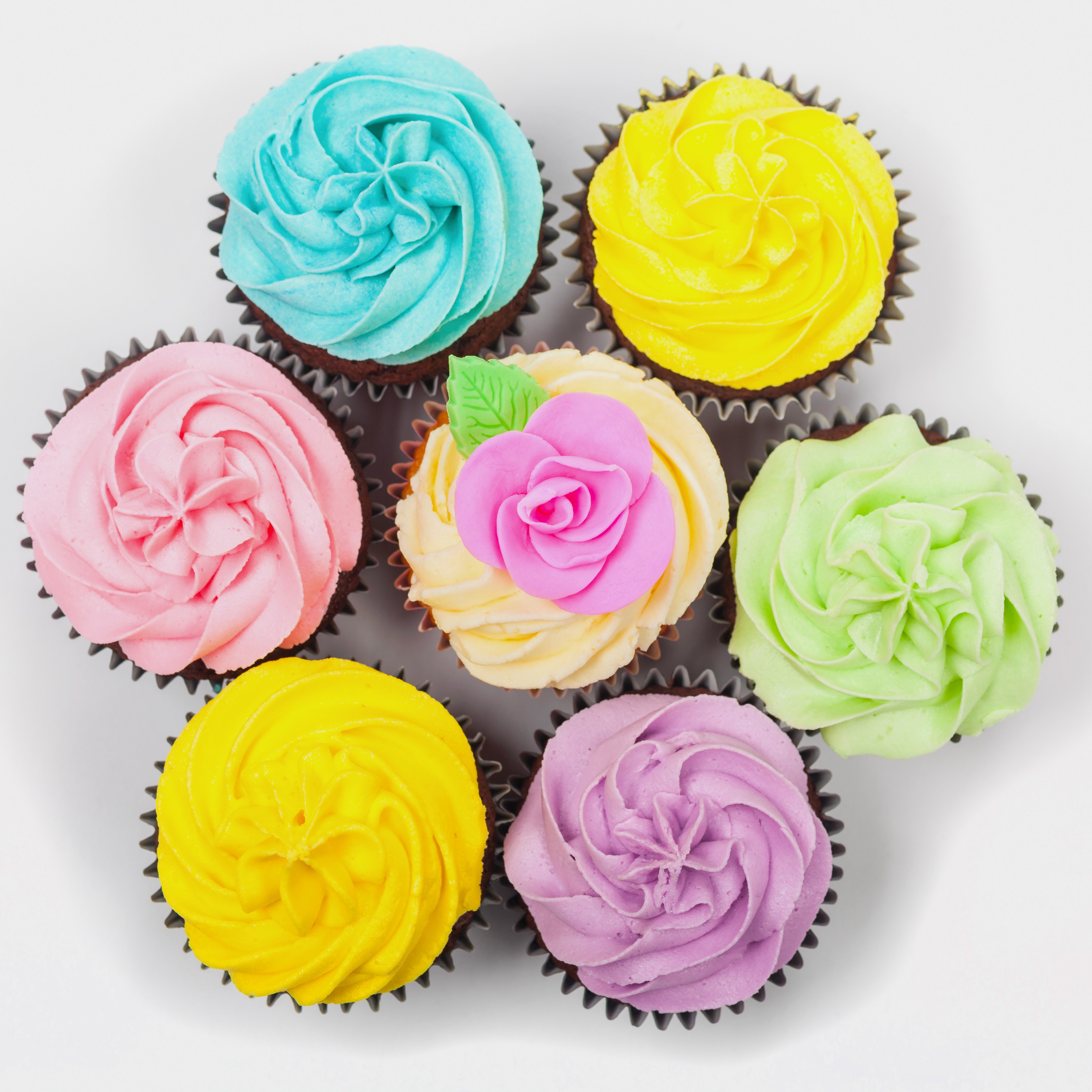 1 We recommend using gel colouring so it doesn’t significantly affect the consistency of your buttercream.

2 Remember how far a drop of food colouring can go. Sometimes less is more!

3 Want to mix specific shades of colouring? Check out this food colouring guide! This is just a guide and buttercream can be a little unpredictable, so just take your time and be prepared for a little tinkering! 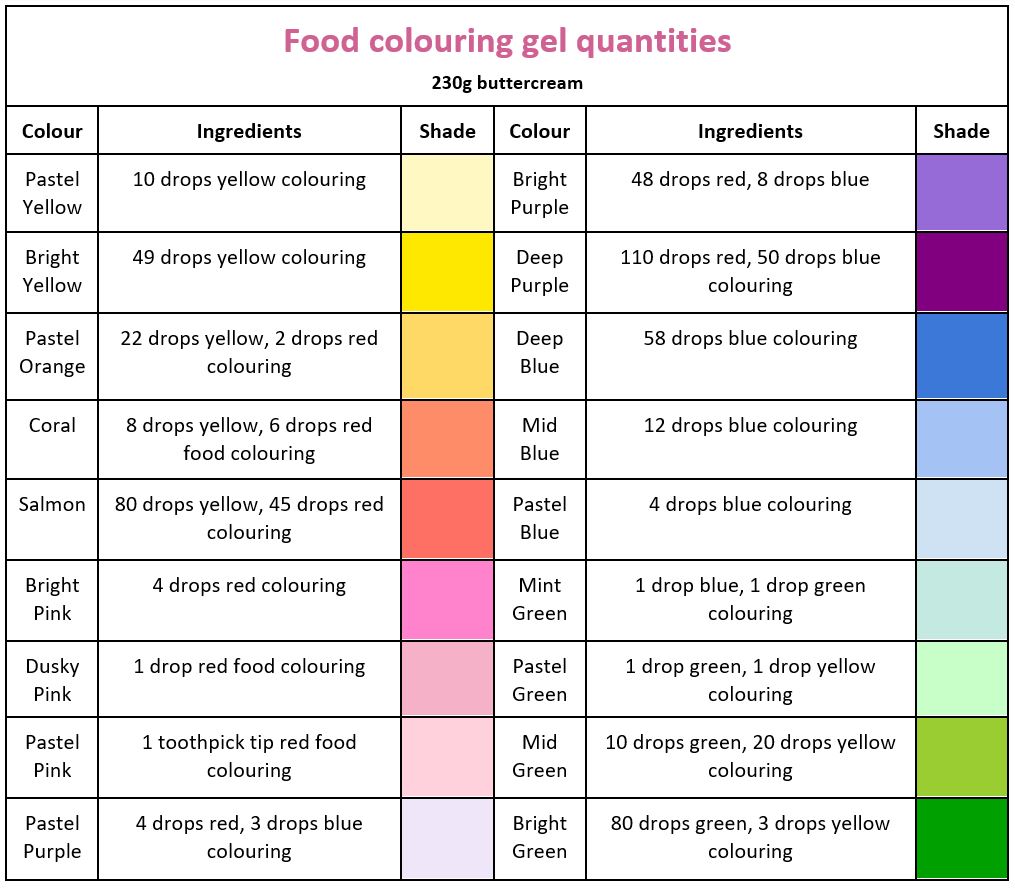 How To Use A Piping Bag 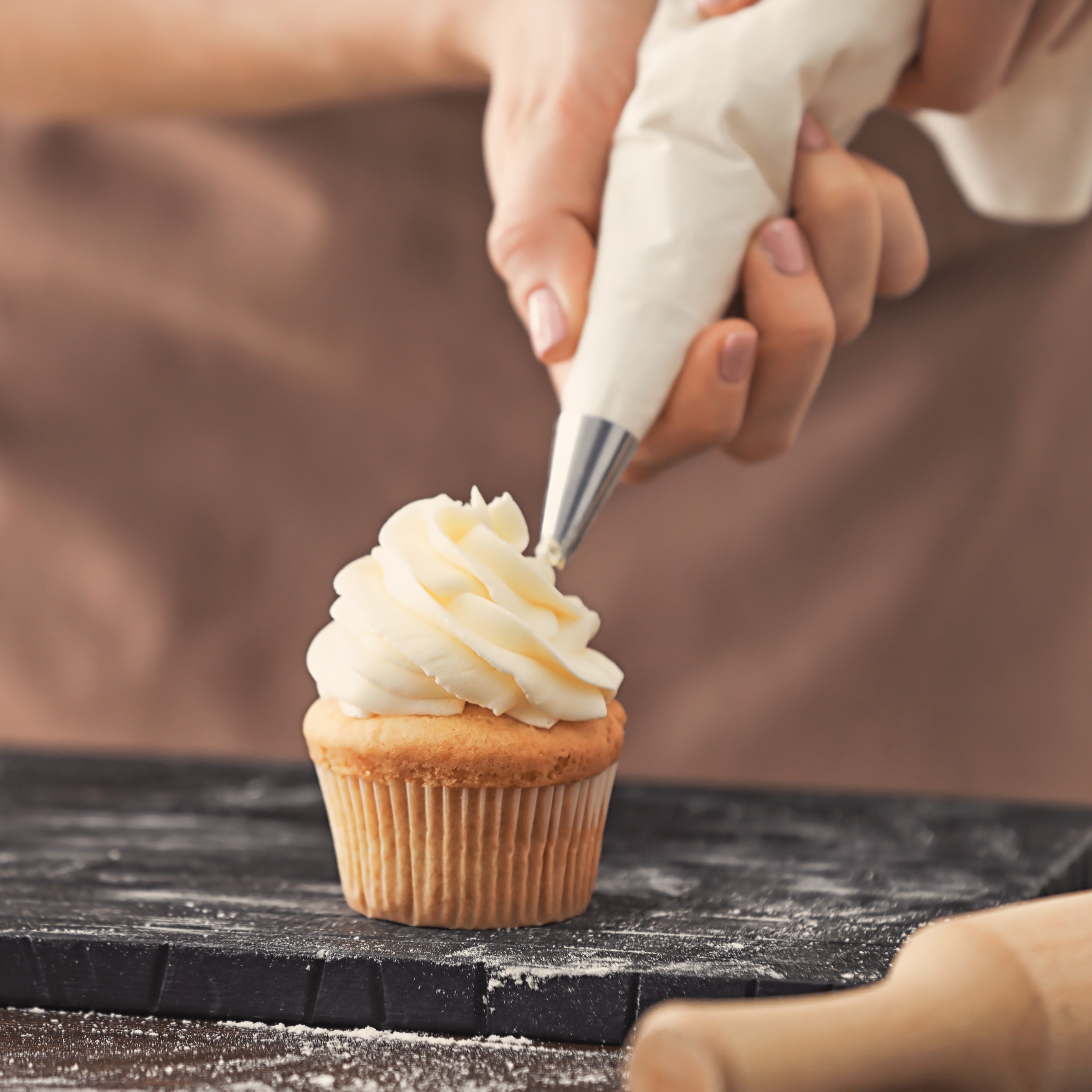 It may seem like we’re being really patronising, but if you’re asking how to ice a cupcake, we’ve got to cover all the basics! Using a piping bag to put frosting on cupcakes can be a little intimidating so just remember, it’s more scared of you than you are of it!

To start, choose your first tip and insert it into your bag so that it pokes its head out of the hole. Make sure it’s really snug so you don’t get any buttercream seepage! If you’re going to be using more than one tip, be sure to use a coupler (available at most good cake stores).

As you fill the bag with buttercream, make sure you grip it with the top folded down around your fingers. Don’t fill it completely either - around three-quarters full is fine. Now twist the top gently to release any air bubbles.

As you pipe, hover the tip slightly above your cupcake and squeeze from the top, using one hand to squeeze and the other to guide your decorations.

Make sure you practice before starting on your cupcakes, to get a feel for the speed of piping and how best to guide your decorations. It’s not a disaster even if you do mess up on a cupcake! That’s the beauty of icing cupcakes: you can simply scrape it off and start again!

Best Ways To Ice A Cupcake

You can make a truly stunning assortment of designs when learning how to pipe cupcakes! Here’s just a few of our favourites not covered in the video… 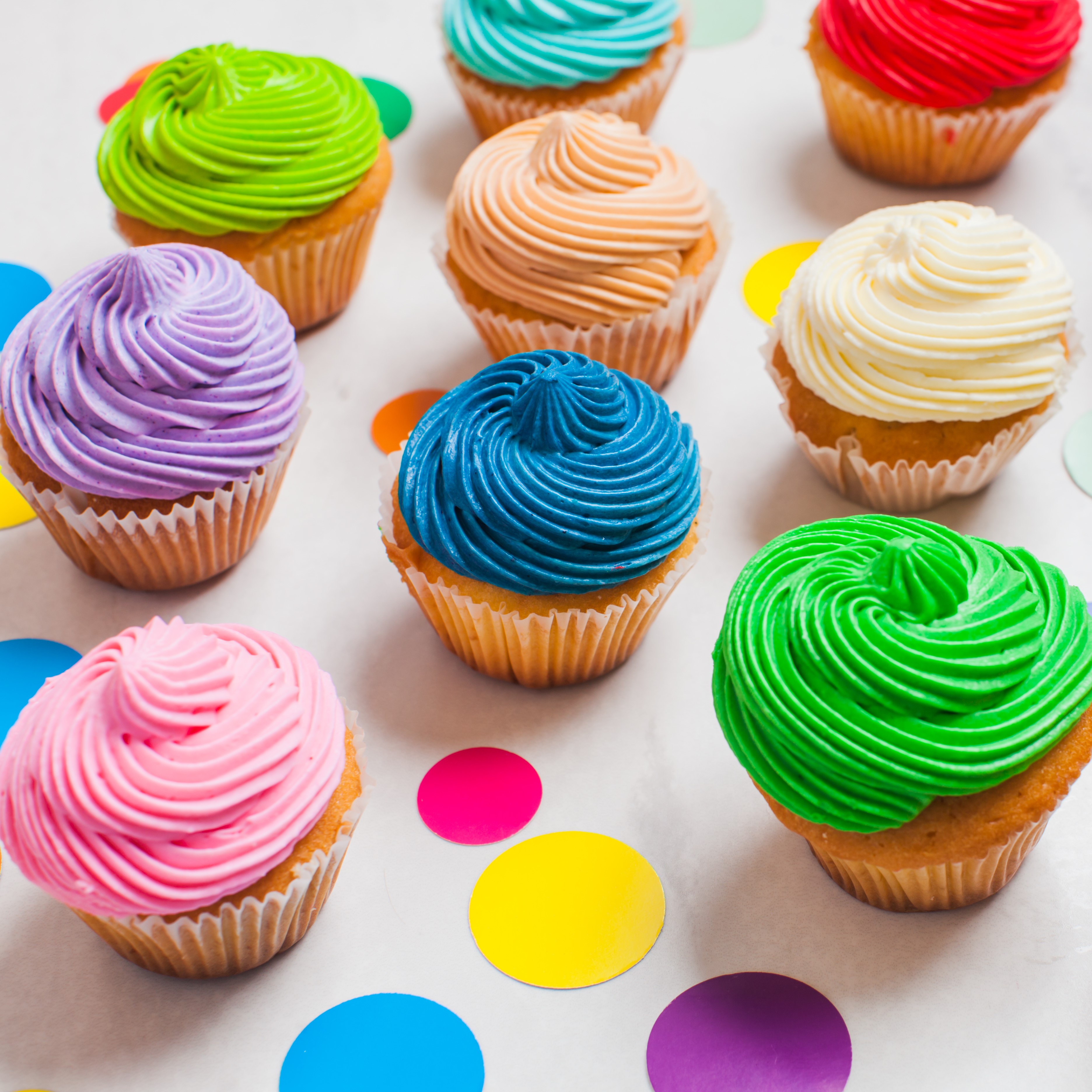 Use a medium-sized plain round tip. Start from the outside edge of the cupcake and slowly pipe around, circling inwards and finishing in the centre with a little peak. 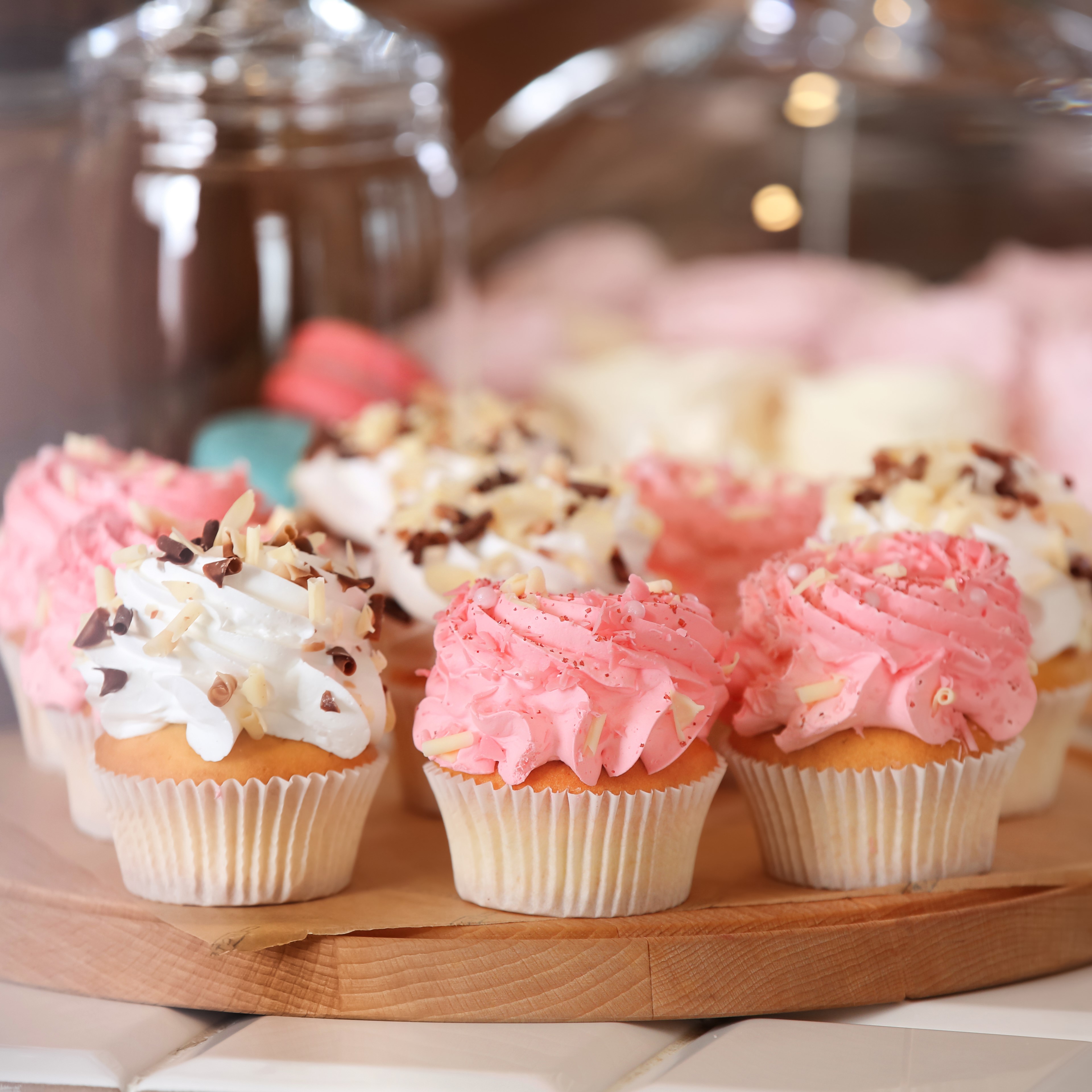 Use a petal tip nozzle and hold it flat against the edge of the cupcake, with the thinner edge pointed outward and the larger end pointing to the centre of the cupcakes. Pipe a row of ruffles around the outside edge by moving the tip slightly up and down. Be sure to do this gently, you don’t want giant wiggly ruffles! Now hold the tip at a slightly higher angle and work in the same way to create a higher tier of ruffles. Continue to angle the tip higher as you work toward the centre of the cupcake. 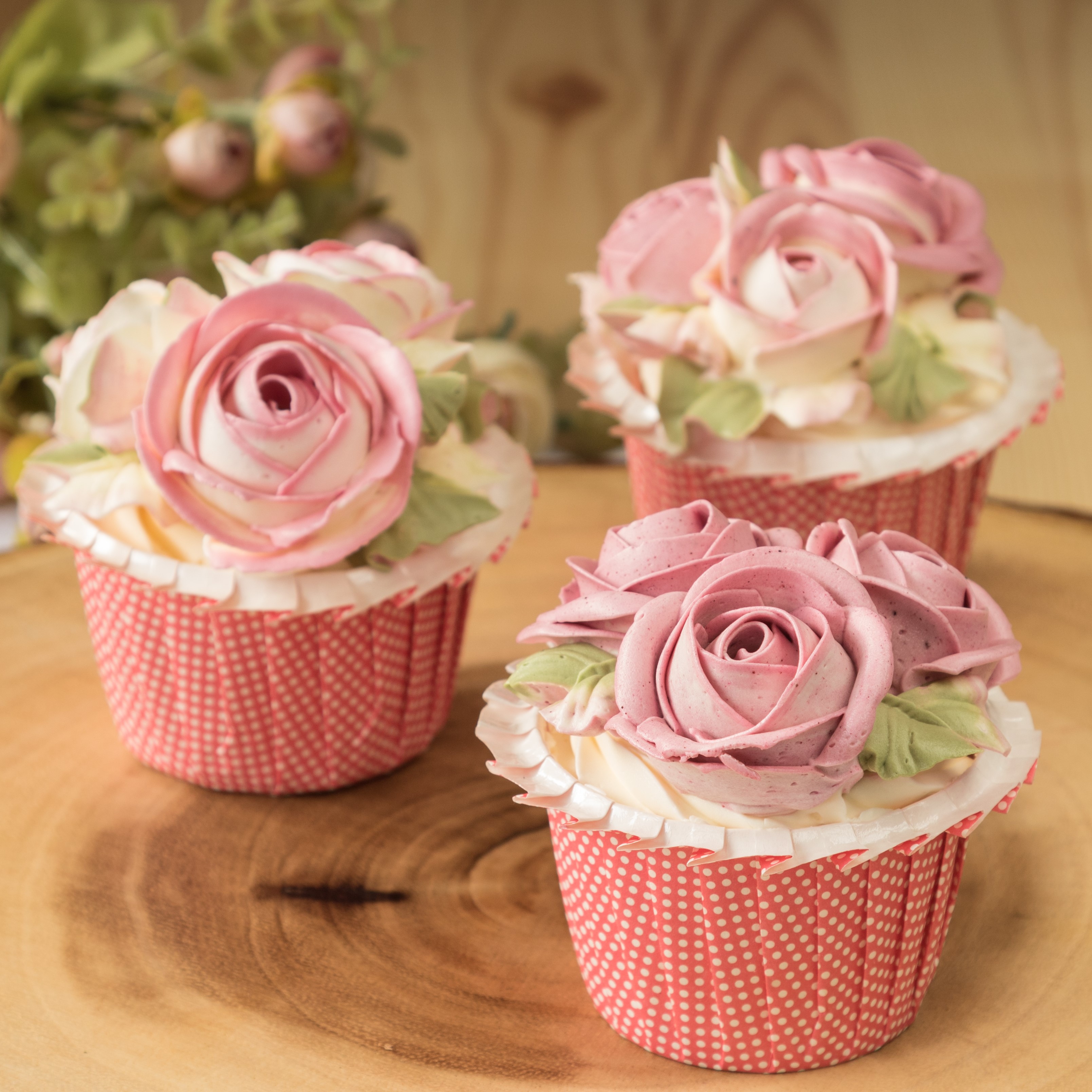 This intricate design is a variation on the rosette design in the video. Use a petal tip nozzle and hold so the larger opening points down at the cupcake. Pipe the centre bud with small upright sections of buttercream. Continue outward, making the petal lengths longer as you move toward the edge of the cupcake. 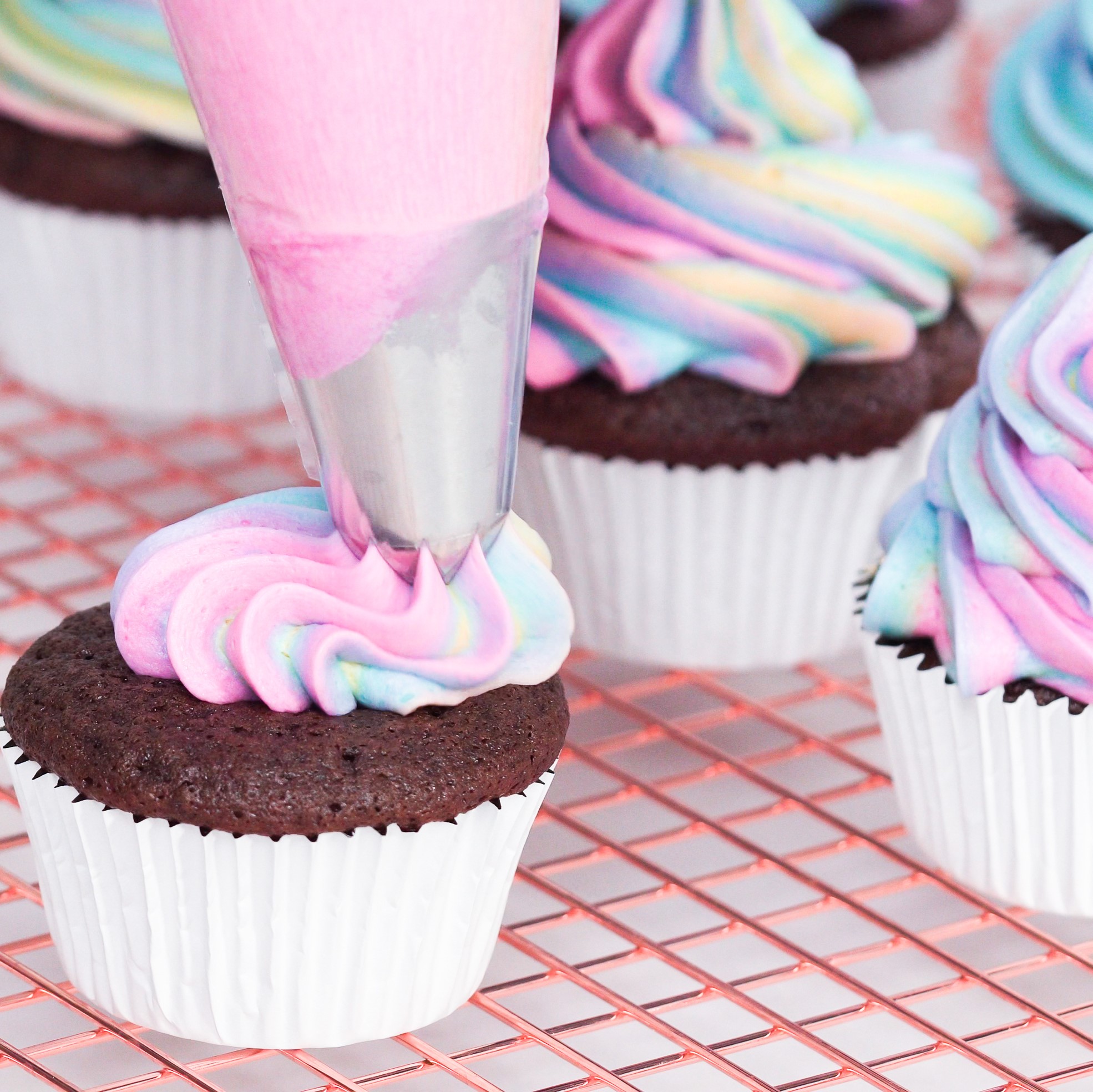 Rainbow cupcakes are all the rage at the moment, so if you want to make some fun and funky unicorn fairy cakes, you’ll want to split your batch of buttercream into two or more parts. Keep one part the original buttercream colour and then colour as many other equal amounts in whichever colours you wish. Fill the piping bag with one colour at a time, focusing on the edges of the bag to make sure it pipes out the different colours as evenly as possible. Choose your desired tip and you’re away!

When To Ice A Cupcake 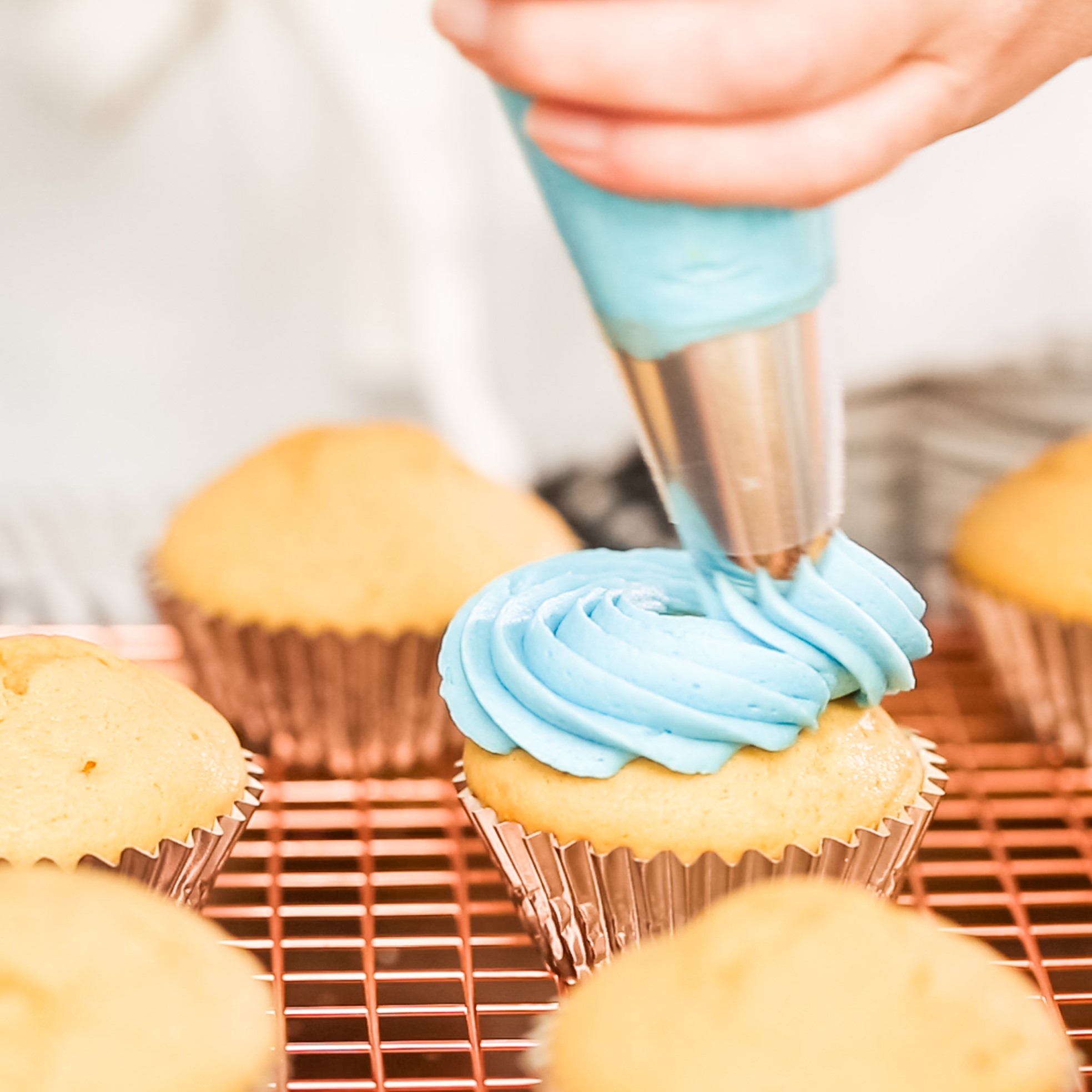 This may seem obvious, but don’t frost your cupcakes straight out of the oven! Buttercream, as we’ve all learned the hard way, does not go well with heat. If you try to pipe buttercream onto a hot or even lukewarm cupcake, you will end up with melted frosting all over your worktop and a very sad and naked cupcake.

We recommend giving the cupcakes at least an hour between the cupcakes being placed on a cooling rack and starting to pipe them. While the top may be cool to the touch in less than an hour, residual heat in the centre can lead to disaster!

Who knew learning how to pipe cupcakes could be so simple? Now you can go off and work out the best way to ice a cupcake for your own style. Some people may prefer a traditional swirl, others an intricate rose! No matter how you put frosting on cupcakes, CD&S has all the advice you need!

If you’re looking for more ‘how to’ top tips, be sure to check out our article on How To Colour White Chocolate! How to... achieve Perfect Two-Tone Frosting How to Create an Easy Ombre Effect with Buttercream How to... make an Ombre Cake