The secrets to creating a showstopping cake

When it comes to showstopping cakes, who else better to speak to than Christine & Phil Jensen of Black Box Cake? Their extraordinary creations have been featured on Channel 4’s Extreme Cake Makers, Food Network, Netflix and Amazon Prime… Tell us, what’s the secret to a truly showstopping cake?

Christine: Whether you're making a traditional Victoria sponge or an extravagant, decorated cake it’s the little things that are the important things. Give a little extra love to each step of the process. Care about the bake, care about the filling, care about the design and decoration and you’ll produce something really memorable.

Phil: For me, it’s all about the bake. A showstopping cake starts with great flavours. It’s no good if it is all style and
no substance. Bad cake is a crime! What you want is that eye-widening sense of YUM! when people take that first mouthful.

You’re known as people who are passionate about your bakes. What first got you baking?

Phil: Eating cake! I love a good slice of cake and so I wanted to know how to make it. It started with making cakes with my mum and I carried that love on through life. I think that’s how so many of us get started. Since then, it’s been all about learning the craft of making a really delicious cake. Don’t let folk tell you differently, it’s a real skill.

Christine: It started for me with cakes for our kids. My standard at the beginning was mass-produced cake from the supermarket, or homemade attempts which were often dry, sunken, or lacking in flavour. I quickly discovered that great cake is not just a random recipe off the internet. Being open and willing to improve (and a patisserie qualification from my local college!) has helped develop my baking skills to where they are today. 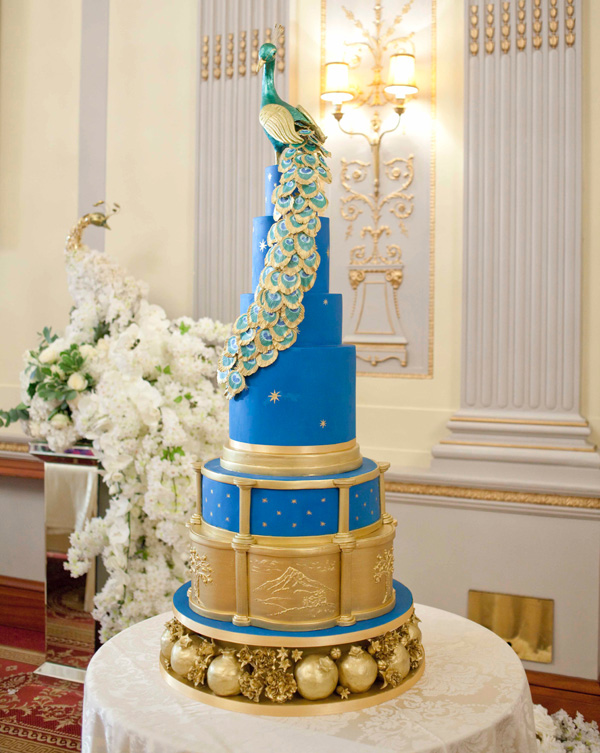 You’ve had many years making gourmet cakes for fabulous parties across the country. What have been the most memorable showstoppers so far?

Phil: When it comes to flavour, one of my favourites would have to be the spiced apple and blackberry cake we made. It was created to celebrate the 100th anniversary of Stonehenge being gifted to the nation, and it was HUGE – our biggest ever cake, which served 2,800 people. But the flavours were perfect for the season and ideal for Stonehenge. We’re pretty sure that if the Neolithic druids had ovens this would be the cake they would’ve made! 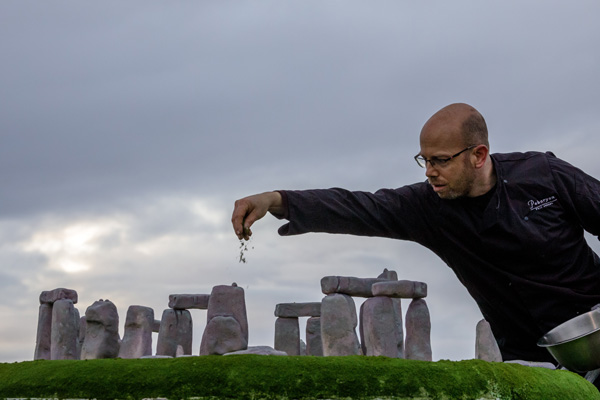 Caption: Phil adding the finishing touches to their Stonehenge cake

Christine: We used heritage apples from a local orchard and a Victorian marbled spiced apple recipe that was a hundred years old. The blackberry buttercream was a nod to the British brambles that were thick on the branches in October. It tasted so good!

Phil: We’ve never made that much cake in one go and it was a recipe we were so proud of.

Christine: A very different cake that I loved making was a custom honey and date wedding cake for a fabulous London couple. They wanted to celebrate their Armenian heritage and the flavours they loved from their own kitchen. Getting the recipe right took nine attempts, but that final mouthful was worth every bake along the way.

We know cake design techniques are affected by changing fashions. Do you find that there are trends when it comes to flavour, or do customers tastes stay the same?

Christine: There are classics for sure. Victoria sponge cake is often the staple because everyone knows and loves it. Around the wedding of Prince Harry and Megan, lemon and elderflower was VERY popular! It had been on our menu for a couple of years. We’d served lemon and wild Cornish elderflower to Prince Charles and the Duchess of Cornwall the year before and they seem to have really liked it. 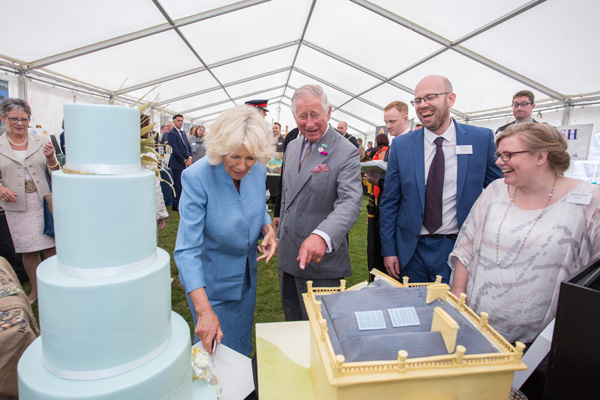 Caption: Prince Charles and the Duchess of Cornwall reacting to Phil and Christine's cakes

Christine: Our flavours are often less trend-driven, and more seasonally driven. Lighter more fruity flavours in the summer, and richer deeper intense flavours in the colder months, though the gents do tend to like carrot cake all year round.

Phil: Gluten-free and vegan bakes have become hugely popular, so we have developed some recipes that meet those needs and most importantly still taste amazing.

Do you think that our increased time in the kitchen since March 2020 has made us better bakers as a nation?

Phil: Well, we’ve all had plenty of time to practice (if you can find the flour to bake with). It’s made me a better baker for sure.

Phil: This last patch of history has been a strange gift of perspective. It’s helped us focus on what kind of memories we want to make with each other and, as we know, the best memories are made around awesome food.

Christine: Definitely. For many of us, the last year encouraged us back into the kitchen and also gave us space to explore, practise and enhance our baking skills.

With the restrictions in parties due to the pandemic, has your oven been lonely?

Christine: Not at all, it’s been busier than ever. Our custom cake business had to go into hibernation, which meant we had to find another way to get cake to people. So, we started our letterbox cake business, BLACK BOX CAKE, delivering our gourmet cake via monthly bakes to people in the UK.

Phil: There were lots of things we couldn’t do this year, but it did give us time to download a decade of baking and caking wisdom into a series of filmed masterclasses.

Christine: The joy was capturing all that we learned to share with other bakers. Not just the recipes. It’s all that cakey know-how. The tricks, the tips, the “Oooh, watch out for this!” parts that you learn from baking thousands of cakes.

Phil: It’s the class I wished we’d watched ten years ago! So, despite the restrictions our oven has been very, very busy.

You can find out more about their cakes and masterclasses at blackboxcake.com.