Latest
Around the world in 100 cake ingredients How to create a chalkboard effect cake Maryland cookies Royal icing made simple: Renshaw Academy's guide to easy decorating WIN! 1 of 3 copies of Jane's Patisserie

Has the Great British Bake Off made us better bakers? 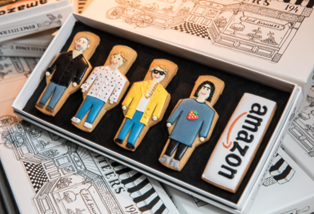 New research into baking habits is released by Amazon.

Whether you love or loathe the Bake Off (and really, who can loathe it?), there’s no denying the baking fever that sweeps the nation when a new series lands on our televisions - and the baking habits that are formed from it. Amazon’s new Get Baking Shop, Official Partner of the Great British Bake Off now has the research to prove this, with almost 9 in 10 Brits believing that baking is more popular than ever before. What’s more, 70% of us are said to attempt to bake our favourite treat at home - though there is still the 5% that say their cakes are always a disaster. Oops! Technology plays a large part in this wave of baking passion too, with 80% of Britons saying that technology makes them a better baker. (Great news for us here at foodheaven.com!) As for favourite bakes, we’re a fan of the classics it seems. The nation’s top ten favourite cakes and baked treats include: But how many cakes do we actually get baking as a nation? Well, Brits apparently bake an average of 49 cakes each every year - which when you do the maths, amounts to an incredible 2 billion bakes! We’re a little bit in awe of these stats, to say the least - but they do prove one thing that we wholeheartedly agree with - baking is here to stay!

Amazon’s Get Baking Shop, which can be found here, will be live throughout the hit series. Baking lovers – from aficionados to first timers – will find everything from utensils and appliances to recipe books, ingredients and more.