Michael Lewis Anderson: A Day with the Cake King

Our editor Leeanne was invited to attend a special event with Michael Lewis Anderson; read all about the experience! Michael Lewis Anderson is known as the 'cake king' and the 'cake designer to the royals'; he presents a range of royal cake moulds that are all beautifully crafted by hand in the UK and made from food safe silicone in a distinct colour of royal blue. Michael shares his skills as a cake designer of 40 years of love and dedication to the art. Michael has made cakes for royal weddings and celebrations, as well a for Hollywood stars, Bill Gates, Phil Collins, the Little Dreams Foundation and the world famous jazz player Toots. This is just to name a few; the list goes on! These moulds enable you either to copy or use your own inspiration to make cakes that you will be proud of.

Making a cake is an act to show how much you care and when you develop this from an occasional bake for family to a cake business for weddings, events and special birthdays... that magic ingredient of 'caring' is still essential, as that is what makes cake, art! Develop this passion for excellence and service further and you can raise awareness for causes, raise money for charity or support people by offering your cake services.

Michael kindly invited me to attend a private Ceremonies des Nations on 24th October, United Nations Day, which was held at the beautiful Mayoral offices in the heart of Brussels, where several United Nations peacekeepers (Blue Caps) were decorated with the commemorative medal of peace. Michael's other distinguished guest Andre Rush, career soldier and executive chef to four American presidents was also honoured by the International Association of Soldiers of the Peace. 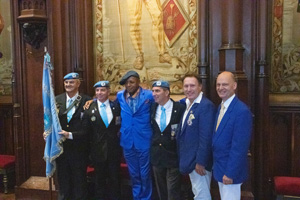 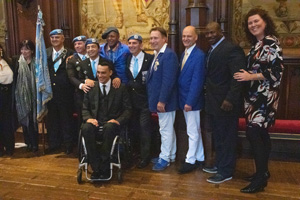 It was with much pleasure I witnessed Michael present a delicious cake made with his beautiful new chocolate range and decorated simply in blue royal icing with the UN badge piped on top. We then had the privilege of being received on the famous balcony of the city hall and in the office of Phillipe Close, Mayor of Brussels. This was the first cake of the day...

Michael: "To celebrate the United Nations birthday, this cake was made with my pure 80% chocolate made with beans from India and a hint of timut pepper, newly created with bean to bar artisans*. The colour was to represent the United Nations and followed through with lifesize busts made from chocolate plastic and gum paste on a structure of Rice Krispies and chocolate, of three children from three nations to represent world peace. Fine doves were piped from royal icing made from egg white powder and the base was royal iced with Roxy & Rich wedgewood fondest. The edging borders were created with my scalloped edge border mould." 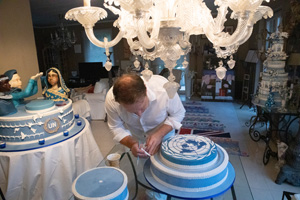 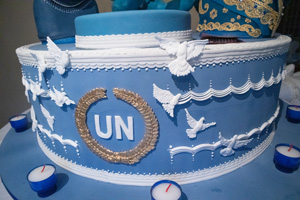 In the evening, a fabulous gala followed at Martin's Chateau du Lac to raise awareness and funds for Alexandre Bodart Pinto's Wheeling Around the World Foundation and HRH Princess Marie-Esmeralda of Belgium, Justine Henin, Marie-Claude Solvay de la Hulpe and Alexandre Bodart Pinto were also awarded the commemorative medal of peace by the International Association of Soldiers of the Peace. Michael presented his cake for peace featuring three hand modelled children, royal icing doves all wheeled in with sparklers to gasps of delight infront of Lee John of '80s band Imagination as he wrapped up the evening's entertainment with an incredible medley of his greatest hits. 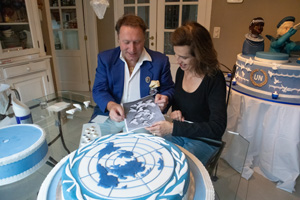 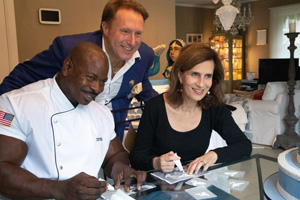 Leeanne found watching Michael work was a joy and is in awe of his work ethic and flair; watch this space and you too can learn from this master patissier with Cake Decoration & Sugarcraft magazine in 2019!