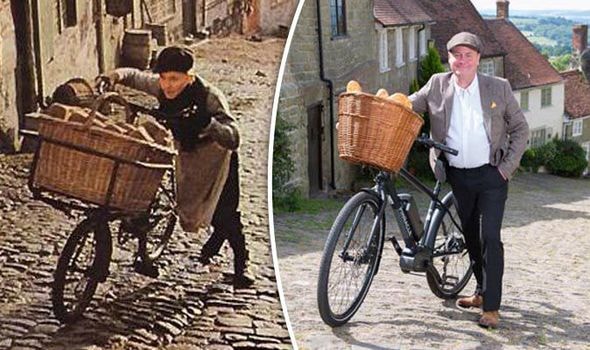 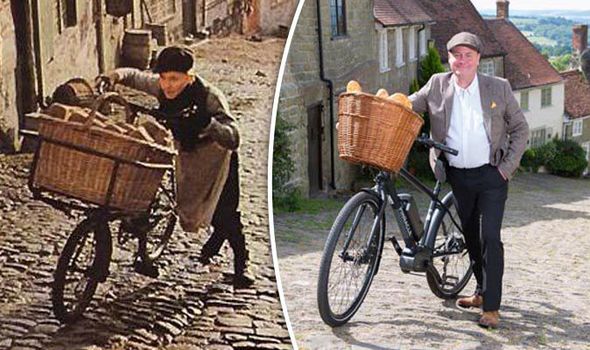 The advert, which depicts a northern industrial town but was actually shot on Gold Hill in Shaftebury, Dorset, has been voted as the nation’s favourite TV commercial of all time.
Mr Barlow, a retired firefighter, has now returned to ‘Hovis Hill’ to peddle up it non-stop using an electric bike.Wearing a flat cap and similar outfit to the one he wore in the original advert, Mr Barlow even had a basket of bread as he powered up it with ease, leaving normal cyclists in his wake. Afterards Mr Barlow, from Stratford, east London, said: “It was kind of strange being back after 44 years. “There were a few people taking photos and I could hear people saying ‘that was the advert where the boy pushed the bike all the way up the hill’ little knowing they were stood next to me.

Whenever I see the advert I find it quite fascinating to see my younger self, and it feels somewhat surreal

“I remember I had to push the bike up the hill many times for the best part of the two days filming on Gold Hill.“It was much easier this time around. I just glided up the hill.” The occasion was for the filming of a promotional advert for bike retailer Evans Cycles. The Hovis commercial was filmed by director Sir Ridley Scott who went on make Alien, Gladiator, Blade Runner and Thelma and Louise. In the advert, Mr Barlow struggles to push a bike laden with freshly baked bread up the steep hill to ‘Old Ma Peggotty’s house’, the last customer on his round.
The iconic advert has been voted as the nation’s favourite TV commercial of all time
The narrator famously said: “Last up on round was Old Ma Peggotty’s house, it was like taking bread to the top of the world. “It was a grand ride back though.”Mr Barlow said: “Looking back, it was an awesome experience. I was 13 at the time and attending stage school when I was asked to audition for the part. “Three boys were auditioned, one couldn’t ride a bike, one wasn’t prepared to cut his hair and I was happy to do both.
[caption id="" align="aligncenter" width="590"] 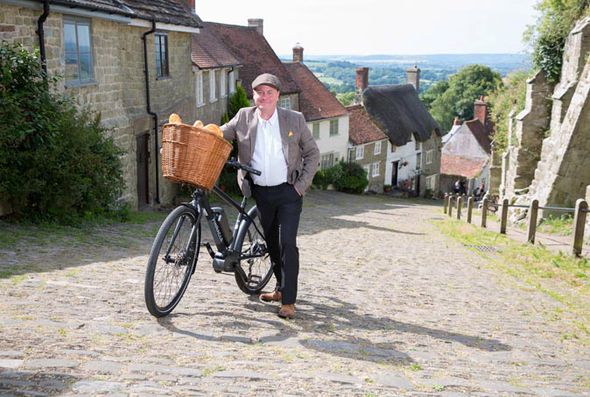 Image: BNPS[/caption]
“I seem to remember it was cold, but I soon warmed up as “Ridley Scott used to let me look into the camera to explain what shot he wanted and how he wanted to do it.“After the advert I had some teasing at school due to the pudding basin-type haircut, but it was mostly in good fun. “Whenever I see the advert I find it quite fascinating to see my younger self, and it feels somewhat surreal. “At the time I thought it was just an acting job and I had no idea it would grow to become the top advert in Britain, but it has got that nostalgic look that people like. “If anyone has been here they know how steep this hill is. When we first tried to film the advert they put me on a bike but it was impossible.”
[caption id="" align="aligncenter" width="590"] 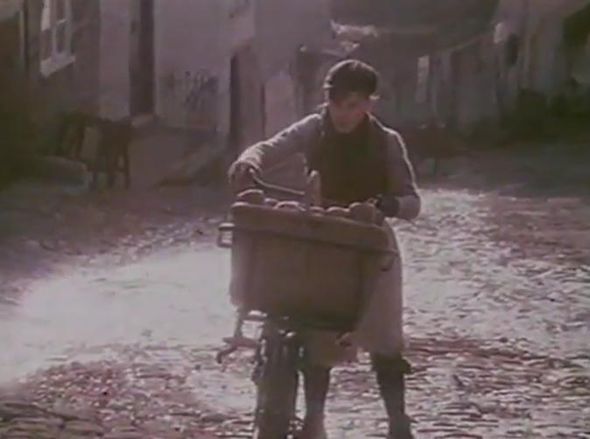 The iconic Hovis advert. Image: BNPS[/caption] The Hovis advert was shot on Gold Hill in Shaftesbury, however, many now refer to it as 'Hovis Hill'.
Mr Barlow attended stage school after leaving his normal school but eventually gave up acting and joined the London Fire Service from which he retired five years ago.In a new video, he is seen making light work of the hill thanks to his electric bike. The two-minute video shows other cyclists attempting to make it up the hill using standard bikes before having to admit defeat half way up the notoriously steep incline. The cyclists then part before Mr Barlow powers his way up Gold Hill. The film was made by London-based Evans Cycles who want to inspire more people to cycle to work.
Joel Natale, commercial director of Evans Cycles, said: “We hope revisiting such a beloved advert, and helping Carl conquer the hill once and for all, will inspire more people to get on two wheels, save on their commuting costs and escape the frustrations of how they currently get to work.”Carl was riding a Pinnacle Lithium Ion 2017 electric bike. E-bikes can travel for 60 miles on a single charge and have a top speed of 15.5mph. They cost on average about £1,500. British bike company Evans Cycles, who filmed the advert, claim electric bikes could save commuters an average of £7,791 in just five years.
This story was originally found on express.co.uk.