We headed to the roaring 1920s this week and TWO bakers left the tent. It's 1920s week on The Great British Bake Off and there were tears and tiers aplenty. 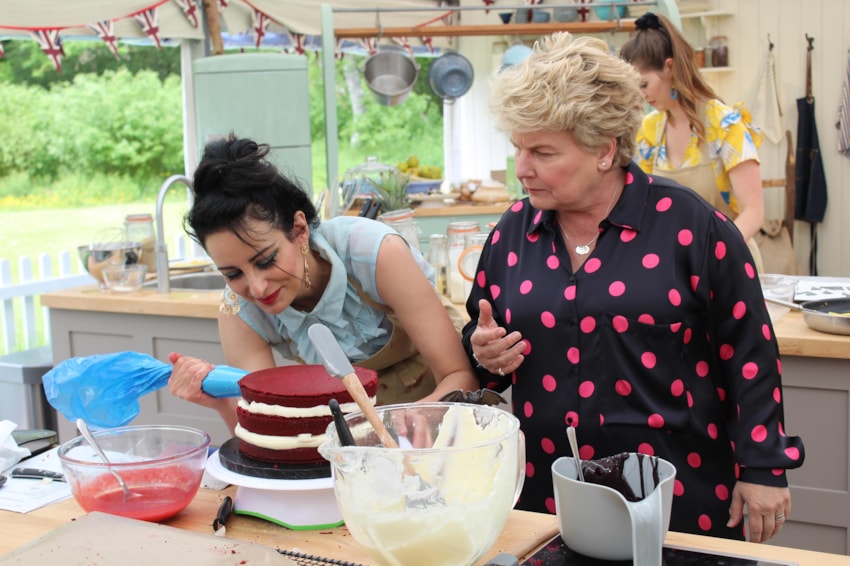 We headed to the roaring 1920s this week and TWO bakers left the tent... 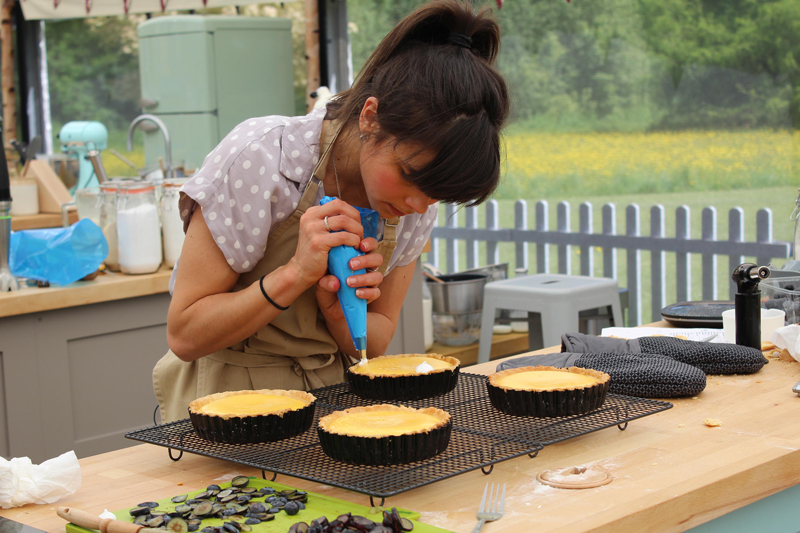 The first challenge the bakers were asked to make custard pies with the decoration reflecting the 1920s theme. Think art deco, flapper girls... or sea monsters! https://twitter.com/BritishBakeOff/status/1176575626184220673 Yes, that's right, Helena (eternal Halloween queen) went with an ancient greek sea creature emerging from her custard pies. While this didn't at first seem to fit the theme (although suited Helena down to a T), she explained over Twitter that they were in fact related to the 1920s. https://twitter.com/Helenagarciafp/status/1176573120649580544 Henry explained how Kool-Aid, the American fruit drink, began in the 1920s. He used lemon and lime in his pies to reflect the first flavours of Kool-Aid. Rosie, the vet, brought in her horse vaccine syringes especially, to inject flower designs into the jelly that was to sit on top of her blackberry custard pies. Michelle was busy baking her blueberry and white chocolate creme brulee pie, while Steph described she was using citrus this week, making a zesty custard made of lemon-lime and orange. https://twitter.com/scottygb/status/1176574103979008001 In fact, many of the bakers were utilising citrus this week, with Alice's orange-infused custard in chocolate pastry, Michael's mango and lime custard in ginger pastry, and Priya's lemon and raspberry pies in lemon shortcrust. However, David was sticking to plain custard pies but went all out on the decoration with intricate flapper girl designs. Michael continued to struggle this week, spouting more iconic one-liners! https://twitter.com/BritishBakeOff/status/1176575778345144320   Rosie and Noel had a lovely chat about her job as a vet; "rabbits just want to die". https://twitter.com/TobyonTV/status/1176575498773774336 But disaster then struck the tent, as Rosie's pie went flying! https://twitter.com/Channel4/status/1176575495942692866 HOLLYWOOD HANDSHAKE ALERT! The drama continued as the judges loved David's "exquisite" pies. And we don't blame them. https://twitter.com/BritishBakeOff/status/1176577333513400322 Priya once again ran out of time, which meant her decoration was rushed and pastry too thick. Alice's pies overdid it on the orange - using orange zest, essence and extract. Steph's were simply "beautiful", but Michelle's "didn't work" as her blueberry couldn't be tasted. Henry's pastry was also very thick and also overbaked. Helena's pies turned out "not bad. Not brilliant, but not bad", according to Paul. Lastly, Rosie's matcha pies were deemed too "damp". [caption id="attachment_23019" align="aligncenter" width="600"] 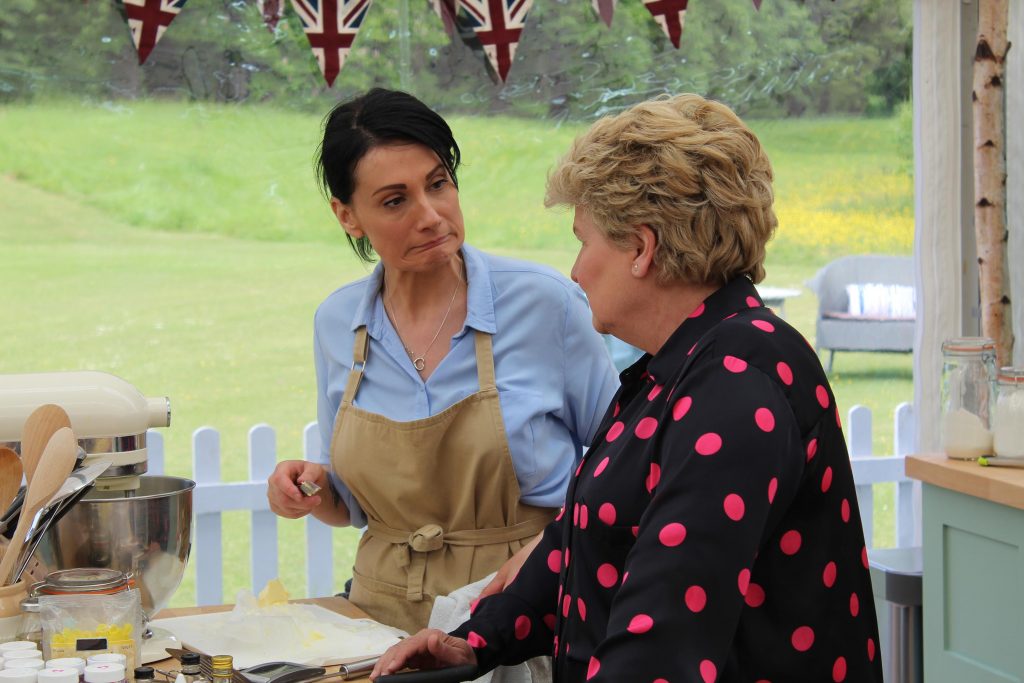 The last challenge for 1920s week was to make a 'prohibition era' cake. Two tiers were needed, with the flavours and decoration to be based on the bakers' favourite cocktails. Once again, the timing was everything, as Paul advised for at least an hour (out of the 4) to be used on decoration. Helena's cake would be based on Dracula which came out in 1922. Her cocktail was 'Vampire's Kiss' and it would have a raspberry vodka centre to imitate blood. https://twitter.com/BakingHeavenMag/status/1176584773998960641 David explained that he doesn't drink but has chosen an amaretto sour. Whereas, Henry's White Russian cake would involved a lot of coffee. It became clear quite quickly that pina colada was a popular flavour as Michelle, Priya, Alice and Steph all opted for it. Alice, at least, aimed to add a bit of a twist by basing it on a pineapple upside-down cake. https://twitter.com/BritishBakeOff/status/1176584059260157953 As time ran out the bakers struggled with the heat, as buttercream started to melt and placing the top tiers was a precarious balancing act. https://twitter.com/BritishBakeOff/status/1176588435273998336 The judges began with Michael, who had a lovely purple ombre on his blackberry cake. But that wasn't enough for the judges as Paul commented that while he "may have got the colour, but certainly haven't got the flavour". Helena's showstopper was described as a "mixture of sinister and very pretty" by Prue. Paul was not impressed with the piping work "not good" or the inside "bland and dry". Ouch. https://twitter.com/Pandamoanimum/status/1176589113845329922 Henry's White Russian looked "very dramatic", and had good flavour, but was dry. Rosie's gained high praise from Prue as "one of the most interesting looking cakes I've seen in a long time", but unfortunately her chocolate ganache was too thick. David's amaretto sour had a good strong flavour, but the buttercream was "grainy", according to Paul. Alice's art deco cake "close up looks a bit of a mess", commented Prue. Her flavours were nice but overall her effort was clumsy. The decoration didn't improve with Priya's cake either, as it looked "rushed", with her fondant being too thick. Paul really liked Steph's "clever" sour lime sponges, and Michelle's decoration was "really interesting and pretty", began Prue. But perhaps Michelle "overthought it", using too many concepts in her decoration. It had a nice texture but seemed to also be too dry. The star baker for 1920s week was once again Steph. https://twitter.com/DBeasleyHarling/status/1176590104296644610 Then, to everyone's shock, two bakers were sent home. The internet imploded as it was announced that Michelle and Helena were leaving the tent. https://twitter.com/harryshoh/status/1176590093689196546 https://twitter.com/scottygb/status/1176591533023354880 https://twitter.com/MoreTeaDebra/status/1176590288166490116 https://twitter.com/major_clanger/status/1176594782778531840     https://twitter.com/BakingHeavenMag/status/1176594692248612864 People were not happy! But the announcement that next week is Dessert Week helped lift the spirits as we glimpsed puddings and chocolate! That's it for this week folks, see you next Wednesday! https://twitter.com/BakingHeavenMag/status/1176593410855247872

Check out our other Bake Off round-ups right here...