Latest
£10 tickets to The Cake & Bake Show this October! WIN! 1 of 3 copies of Jane's Patisserie How to make autumn foliage Around the world in 100 cake ingredients How to start an online cake business part two – 6 ways to win on Google

It's Festival week on The Great British Bake Off and with only six bakers left, things turn up a notch. But in Bake Off land 'festival' meant... 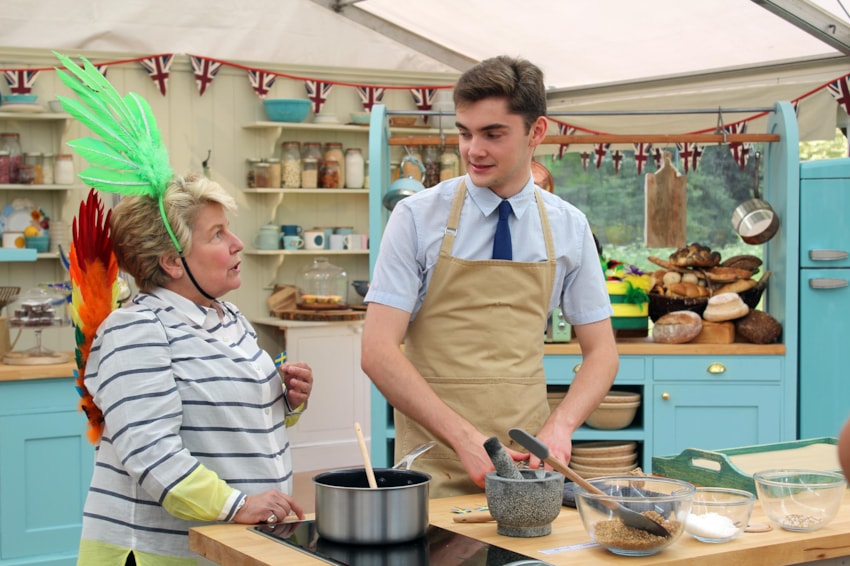 It's Festival week on The Great British Bake Off and with only six bakers left, things turn up a notch

Festival week may have conjured up images of soggy tents and muddy wellies, but in Bake Off land 'festival' meant 'festivals' like Easter, Diwali and Mardi Gras. You know, a baking-related theme that makes sense... *WARNING – CONTAINS SPOILERS*

Festival week began with some "absolutely delicious buns". And by that, Prue was, of course, talking about yeast buns, such as those of the hot cross variety. Steph, Micael and Alice all got on the HCB train, with Steph adding some zest and spice to the Easter favourites. Alice opted for a lemon, blueberry and almond twist, whereas Michael decided to combine holidays, adding a figgy pudding flavour for some extra Christmas pizzaz. When chatting to the judges, he mentioned he'd be using 500g of dried fruit for his 24 buns, which led to an awkward interaction with Paul... https://twitter.com/BritishBakeOff/status/1181646741264883713 David also went down the Easter route, but instead with some Bulgarian Kozunak plaits. Henry chose to celebrate Sweden, and if that means celebrating Cinnamon Bun day then we're on board (October 4th, for anyone wanting to add it to their calendars!) He decided to bake those chocolate kardemummabullar buns, we all know(?) and love. Rosie went with a Mardi Gras theme, making Semlor buns decorated with Peacocks. Don't worry this isn't the last bird we'll see Rosie the vet making tonight. Plus Henry amazed us all with his bun keepie-uppie skills, cementing our adoration even further. Truly incredible. https://twitter.com/BritishBakeOff/status/1181648801771278338 Michael's buns were unfortunately misshapen. Perhaps due to the sheer amount of fruit inside? But the figgy pudding flavour was "spot on", so not all bad. The judges were on fine form, handing out two handshakes for this challenge! First, Steph finally got her Hollywood approval, with her perfectly textured buns. https://twitter.com/innocent/status/1181651362049921026 And Henry was taken by surprise by the offer of a Hollywood handshake for his cinnamon buns, telling Paul to "shut up", earning him a lot of love from Twitter! https://twitter.com/BakingHeavenMag/status/1181651333901946880 https://twitter.com/scottygb/status/1181651902574059526 https://twitter.com/skyxbluesilk/status/1181651518019293186 Unfortunately, they weren't so nice to poor Alice, as Prue described her hot cross buns as looking "homemade". Oof. https://twitter.com/meganbiggin_/status/1181651153764978689 [caption id="attachment_23259" align="aligncenter" width="600"] 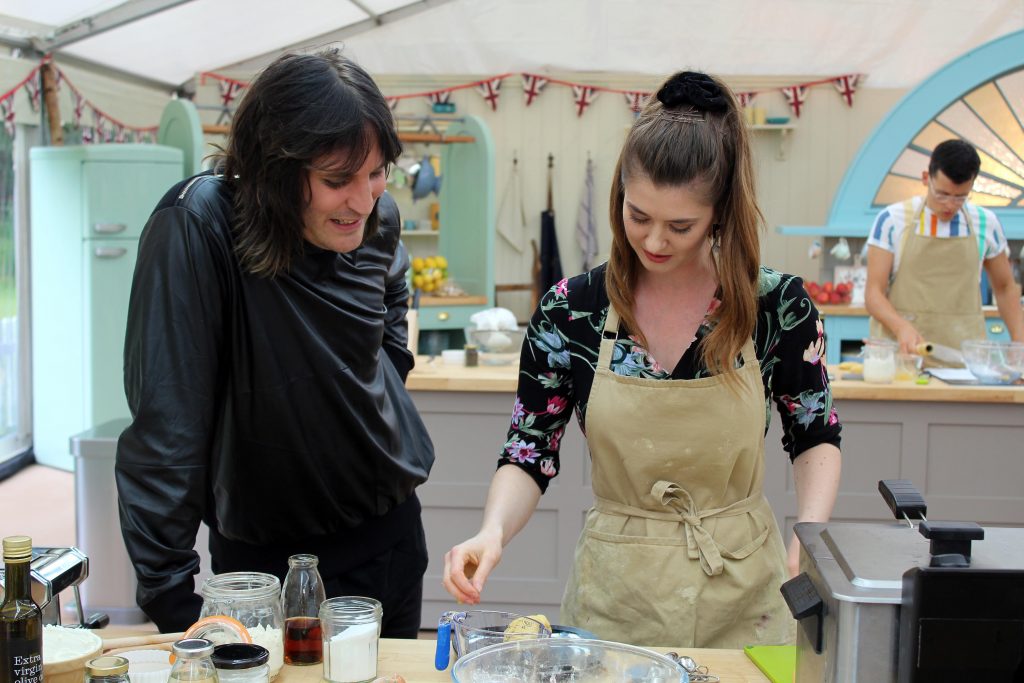 Once again, the announcement of the Technical was... huh? https://twitter.com/jonoread/status/1181652613328199680 The bakers were asked to create 12 Sicilian Cassatelle, which are apparently fried pastry filled with ricotta. Cut to the straining of said ricotta cheese. Ugh. The bakers seemed baffled by the pastry rolling machines and once again the ovens were not in use, as the friers were pulled back out of the cupboards. https://twitter.com/BakingHeavenMag/status/1181654933378076677 Many of the Cassatalle puffed up in the fryer, leaving them to break open. David and Michael didn't have enough filling, and while Steph's hadn't burst, she had over-fried them due to the thick pastry. Rosie was the favourite, with all her bakes being neat, sealed and full of ricotta. https://twitter.com/Channel4/status/1181654869066694656 [caption id="attachment_23258" align="aligncenter" width="600"] 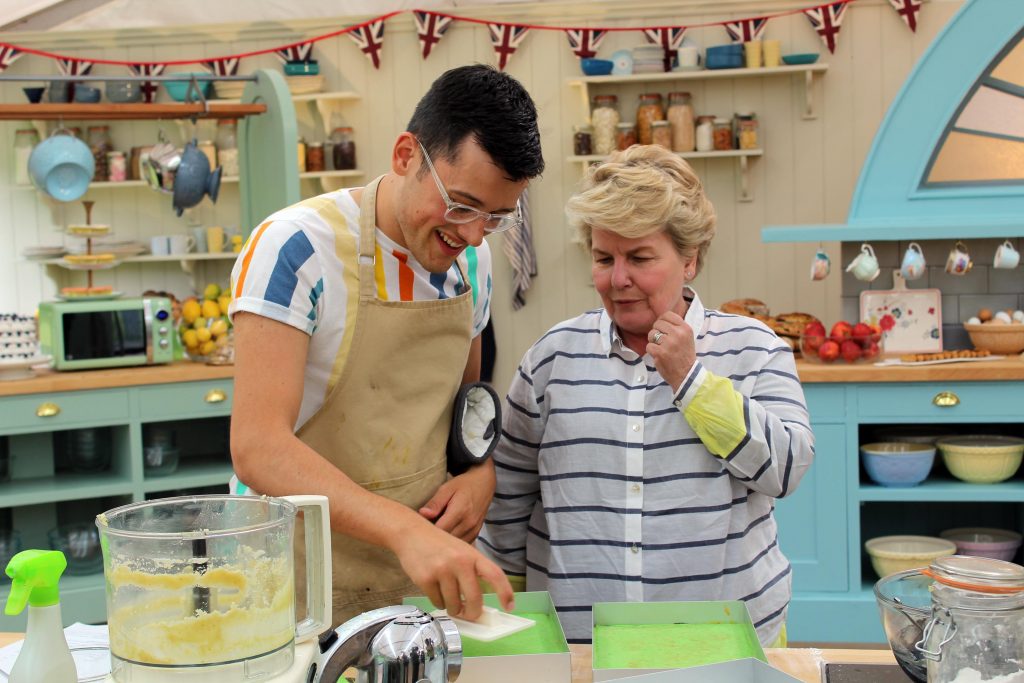 Onto the last challenge, and it was another one that raised a few eyebrows. The bakers were asked to make Sarawak, a colourful cake from Malaysia. https://twitter.com/TechnicallyRon/status/1181659371853533186 It is made up for several layers of thin batter, which is grilled, then cut into shapes and reassembled to make intricate patterns. Paul described it as "one of the hardest cake designs to make... there's nowhere to hide, so we will see the problems." No pressure then. https://twitter.com/Channel4/status/1181656815550885888 Ever the nerd, Henry had drawn up a plan to help him with his Sarawak. He opted for a lemon and lime sponge with raspberry and mint jam and admitted he'd used a large number of eggs practising. https://twitter.com/DrBeauBeaumont/status/1181656519890345984 Michael's Jamaican flag style cake has a rum and ginger sponge, with rum and lime jam, and Steph joined in with the alcohol theme, using orange liqueur in her orange and chair spiced sponge. Rosie plans to make two eight-layered cakes which would be arranged into diamonds. Her bird obsession continued as she creates birds with blown sugar to decorate. She admitted she found the flavours disappeared a lot quicker when grilling as opposed to baking. She seemed to struggle with the grill in general, as a smell of burning filled the tent... https://twitter.com/Channel4/status/1181658989039210496 Alice's chocolate orange and salted caramel Sarawak is inspired by her hometown carnival, with kaleidoscope fireworks. David's 'sculpture' cake would have a spiced flavour, with monochrome and bright colour layers. But he also struggled to control the direct heat from the grill, as he burned half his cake layers. https://twitter.com/scottygb/status/1181659595917463553 As Sandi and Noel call time on the showstopper, Henry and Michael hug with relief. After the break, it is time for the judges. https://twitter.com/BritishBakeOff/status/1181661885327904769 Steph's cake layers had a few gaps but otherwise was "lovely". Rosie's "looks a bit messy, not neat at all", according to Paul, but her tasty flavour made up for it. Michael's top and bottom layers were all the same colour, meaning they ended up looking like one thick block. And the taste wasn't any better, as Paul called it "claggy and stodgy in the mouth" and "rubbery". Soaking the cake in rum was a bad idea. https://twitter.com/Channel4/status/1181661527314583552 "What's this?" asked Paul. "Cake." Henry's cake looked like "egg and cress sandwiches" but had a good texture. Paul was "quite impressed. Not perfect but been executed fairly well." Prue loved the shapes of David's sculpture, but it is "very small". It was "nice and spicy, but could be sweeter", and Paul agreed that it was "rubbery" and "not sweet enough". Alice may have struggled in the earlier challenges, but she managed to save herself with her showstopper, as Paul thought the detail was "incredible". Prue agreed it "almost looks like weaving". Paul finished his praise with the "detail is exceptional, vibrant and very artisitc". Things were really close this week when it came to star baker and the baker leaving the tent. Many on Twitter were torn and didn't want their favourites to go. Herny earned his online admiration as he won his first Star Baker title! https://twitter.com/BritishBakeOff/status/1181663369176244231 https://twitter.com/maggieharcourt/status/1181652810162679808 But unfortunately, it was Michael's time to leave the tent. We'll miss him! https://twitter.com/BritishBakeOff/status/1181663606292860929 https://twitter.com/BritishBakeOff/status/1181672395586838530

That's all for festival week. Next week: it's the quarter-finals and Pie week! Missed last week? Catch up with all things Bake Off!