Collette Divitto, 26, took matters into her own hands after she found it difficult to land a full time job and it led to sweet success 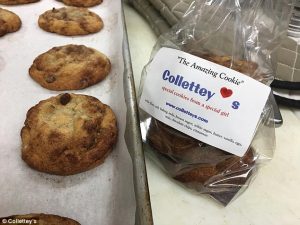 Image: Daily Mail[/caption]
A young woman with Down syndrome launched her own company called Collettey’s Cookies business after she found it very difficult to get a job. This Boston native is now working all hours, her dream has turned into a reality and her business has taken off as her story connected many people across the country.

Even thought it is still a relatively small business, Collette has big hopes for the business to grow so that she can start to hire others with disabilities.

In an interview she was very careful not to let her brilliant recipe be made known:

“This is the recipe,” said correspondent Jim Axelrod, pointing to a clipboard.

Being in her kitchen baking up the next treat always made her happy however, when she kept getting rejected for jobs, she decided that this is going to make her money and that is how Collettey’s Cookies was born.

“I think that all of that rejection for her made her say I’ll show them,” said Rosemary Alfredo, her mother.

Around 10 days ago, she was selling 100 cookies a week at a market, whose owner was the only grocer in Boston to give her shelf space. Then Boston’s CBS station ran a story that went viral. Now she has to fill 4,000 orders from around the country. With a dozen per order, Collette has to bake 50,000 cookies. [caption id="attachment_10834" align="aligncenter" width="300"] 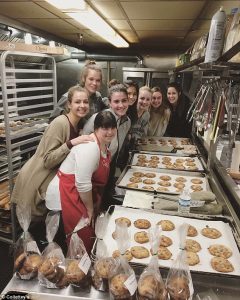 Collette's employees helping out in the kitchen. Image: Daily Mail[/caption]
The Commonwealth Kitchen, a non-profit business incubator, has stepped in to help her scale up. Collette has also started her own GoFundMe page to raise money for her own facility. Help Collette get closer and closer to her real dream! This story first appeared on Daily Mail and CBS News
Content continues after advertisements